One thing is certain, drought will return 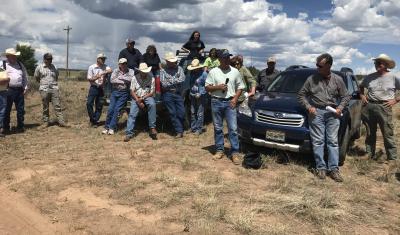 Sw Hub acting director Emile Elias reflects on the 2018 drought. Even as we experience above-average moisture across most of the Southwest Region, or do battle with a bomb cyclone that pummeled the Rockies and the Plains, drought is an ever-present threat and it will return.

With all the rain in Arizona and snow across the Sierras and the Rockies, are we at risk from apathy towards drought (as illustrated by the National Drought Mitigation Center’s Hydroillogical Cycle diagram)? The NDMC cautions us that while it’s acceptable to appreciate a “return to normal”, we must learn from the experience of drought. The SW Climate Hub received funds to support economic impact assessments of the brutal 2018 drought, and the Hub is working with a team including the National Integrated Drought Information System (NIDIS), states (Arizona, Colorado, New Mexico, Utah) and land grant universities to document economic impacts.

Looking back at 2018 - exceptional drought hovered over the Colorado Plateau for nearly the entire year. It began with the 2018 snow drought and persisted until 2019. By contrast, earlier this month (March 15) Snow Water Equivalent at most SNOTEL sites in the Colorado Mountains, a region that provides water to much of the Southwest, was >160% of Normal, reflecting numerically the recent, unrelenting 2019 snowfall. Despite the very welcome snow, we still reflect on what built resilience for people and communities during the 2018 exceptional drought.

With the 2018 Colorado Plateau drought, the 2012 Midwest and Plains drought, and the extended 2014 to 2017 California drought still fresh in recent memory, scientific projections of more to come portend increased future water scarcity. One of the key findings of the Climate Science Special Report, [Volume I of the 4th National Climate Assessment] states:

Even as we experience above-average moisture across most of the Southwest Region, or do battle with a bomb cyclone that pummeled the Rockies and the Plains, drought is an ever-present threat and it will return. And future droughts will occur under warmer conditions than we have experienced in the past. And that is why we need stories of success. To ultimately build resilience for people and communities despite future climate projections. What helped the 2018 exceptional drought and drought impacts?

Documenting drought impacts via the drought impact reporter and knowing disaster relief eligibility through tools like the FSA Livestock Forage Disaster Program Eligibility may help. To continue to provide information and tools to build resilience, the SW Climate Hub is working with partners to bring a workshop on Soil Moisture and Wildfire Prediction and a course for tribal environmental professionals Introduction to Climate Change Adaptation Planning. Stay tuned for drought economic impact assessment results and more ideas to build thriving communities.