One of the founders of CSP LLC, Clay currently provides coordination and outreach services to the Southern Plains Climate Hub. Clay served in the House of Representatives from 1994 through 2004 and as Executive Director of the Oklahoma Association of Conservation Districts from 2004 to 2014. Prior to his service in the Legislature, he Pope served as Agriculture and Trade Assistant to Congressman Glenn English in Washington D.C. During his tenure in the legislature, Clay served as chairman of the Agriculture and International Trade Committee of the National Conference of State Legislatures, Chairman of the House Revenue and Taxation Committee, Vice Chair of the House Appropriations and Budget Sub-Committee on Natural Resources and as Vice Chairman of the Oklahoma House Agriculture Committee. He also served on the Intergovernmental Advisory Panel to the United States Trade Representative, representing state legislatures. Clay has received numerous honors including the Farm Bureau Legislative Meritorious Service Award, Oklahoma Cattlemen’s Association Representative of the Year, The Oklahoma Farmers Union Legislative Leadership award, the Oklahoma Association of Conservation Districts President’s Award and was named Agriculture Man of the Year for Oklahoma by Progressive Farmer magazine in 1999. In 2005 Clay was named a 'Graduate of Distinction' from the College of Agriculture at Oklahoma State University and was named the Oklahoma Conservationist of the Year by the USDA Natural Resources Conservation Service in 2009. In 2013 he was recognized by the National Academy of Television Arts and Sciences with a regional Emmy Award for his outreach and educational work in conjunction with the Ken Burns documentary The Dust Bowl 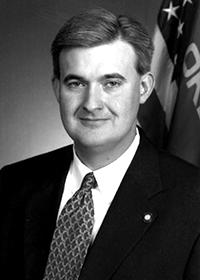