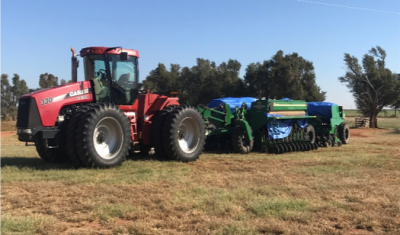 Farms and ranches make up nearly all of the private land in this area. Cropland and grassland (rangeland and pasture) make up nearly all of the land area. Most farms include both cropland and grassland and produce a combination of grain crops and beef cattle. Wheat is the principal crop, but soybeans, corn, grain sorghum, and cotton also are grown in the area. The grassland in the area is used for cow-calf and stocker cattle operations.

The primary goals for the entire Pope property are to eliminate soil and wind erosion, increase water holding capacity, increase water infiltration, and increase the microbial activity of their soils. This will be accomplished by meeting two primary objectives: 1) Increase residue levels and no till crops for agricultural productivity and 2) consistently have a living root growing to feed soil microbes.

The Popes also established separate goals for their dryland acres. These are to reduce the risk of and increase flexibility in agricultural operation with dryland acres as well as leave crop and cover crop residues to reduce wind erosion and build soil health. The objectives they identified to meet and accomplish these goals are to 1)  diversify their crop rotations with cover crops as forage for beef cattle and 2) incorporate mixed species of cover crops after winter wheat for diversity. See the full text of this Adaptation Plan for more information.

Climate change in the region is predicted to result in warmer temperatures – already, mean annual temperature has increased by approximately 10 F since the first half of the 20th century. Warming is projected to increase along with increased frequency of extreme heat events in Oklahoma. Projections predict an increased likelihood of drought, as higher temperatures accelerate soil moisture loss and augment the intensity of naturally occurring droughts. Oklahoma is consistently ranked in the top 10 states affected by extreme weather events, and these events are expected to become more intense in the future.

Pope Hilltop Farm is expected to face challenges specific to their operation. Extreme heat events will cause animal stress, which can reduce productivity of livestock. Wheat can also be affected by changes in weather patterns due to its need for cooler nights to vernalize. Increased temperatures can also increase pressure from pests, such as the sugar cane aphid and various species of ticks, due to increases in insect range. Extreme droughts and heavy rain events can impact cash crop yields such as winter wheat and grain sorghum, and later planting dates for winter wheat can result in the loss of grazing on dual purpose acres. Droughts can also decrease the ability to have successful cover crop stands, affecting soil health and reducing grazing opportunities (see PDF for more detail). 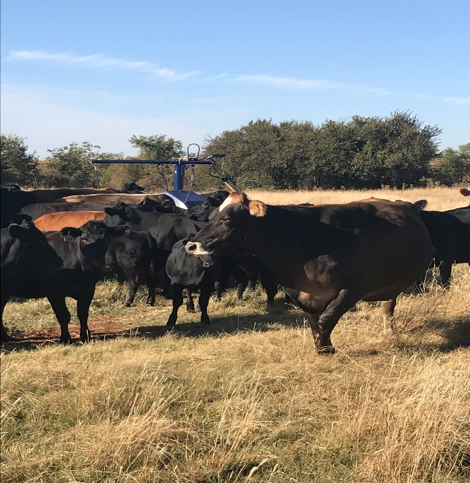 The Popes noted specific challenges associated with two of their objectives. The first challenge they noted is to increasing microbial diversity in the soil. This objective is difficult to meet while simultaneously balancing both effective weed control and crop fertility and reduced input of synthetic nutrients and chemical treatments. However, one positive effect of increasing microbial diversity in the soil is a reduced need for inputs and increased soil water holding capacity.

Another challenge is to include cover crops in their rotation. To grow cover crops, there must be sufficient rainfall for them to germinate shortly after they are planted. This does not always occur in a predictable manner, especially as the climate changes. One positive aspect of incorporating cover crops into a rotation is that they provide the opportunity to graze cattle as an extra source of income.

The Popes have identified four adaptation actions to undertake on their farm. The first is to plant different varieties of commodity crops with diverse harvest dates to widen the window of opportunity to plant cover crops. They anticipate this will result in increased flexibility for planting cover crops within growing seasons. Second, they want to reduce inputs, which will reduce overall farming costs. Third, they plan to continue to incorporate feeder cattle on cover crops, which they expect to improve soil health before growing winter wheat. Finally, the Popes will work to always keep the soil covered with residues from both main and cover crops, and they will continue to use no-till to reduce soil disturbance. This is expected to maintain or increase soil carbon.

One of the key components for evaluating the effectiveness of any change to a farming/ranching operation is its overall economic impact. The producer has to make a profit if their operation is to be sustainable. The Popes will monitor any changes to input costs to see if increases in fertilizer efficiency can be realized. Reductions in fuel use will also be monitored to determine savings. Reductions in harvesting costs on graze-out acres and cover crops versus alternative cash crops will also be reviewed to determine if income realized from grazing and reduced harvesting costs outweigh income that would be realized from harvesting an alternative crop (e.g. grain sorghum). Year-to-year yield comparison on the primary cash crop of winter wheat will also be evaluated to determine if improved soil health is increasing yields. The Popes will also evaluate input costs to determine if changes in yields plus cost savings are increasing the operation's overall economic health.