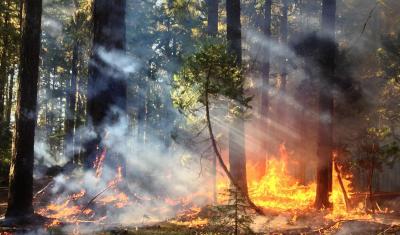 Disturbances are events, like tornados, wildfires or floods that cause marked changes to the impacted area. Stressors, like pathogens or water stress are dynamics that impair or comprise the function or productivity of the system. Disturbances and stressors are often thought as one in the same and while they can have similar effects to agriculture production to rangeland and forest resources there are important differences worth considering.  It is important to note these differences because it may change the management approach or practice being considered when dealing with a disturbance event like a flood or persistent stressor such as nitrogen deposition.

Examples of ecological disturbances include fires, landslides, flooding, windstorms and insect and pest outbreaks.  Disturbances often come in the form of short-term or temporary changes to the landscape but can have very significant ecosystem impacts. These events often act quickly but with great impact and thereby are able to promote changes to the physical structure of the system. For example, a fire burning over a mature forest results in a different composition of species after the disturbance event.  Other types of disturbances may occur over longer, persistent timeframes that also can promote changes to the biodiversity or health of the system.  When managing for or after a disturbance it may be useful to consider the extent and intensity of the impact caused by the event.  To do this, the manager may need to assess the full spatial extent of the disturbance and then look where on the ground the impact is greater compared to areas within that extent the disturbance had very little influence.  In such cases managers or land owners can address just those areas in greatest need occurs.

Environmental or ecological stressors are thought of as pressures or dynamics that impact ecosystem components or processes caused by human and associated activities. Stressors may impede or compromise plant or animal performance, productivity or increase susceptibility to other forms of pressures like disease or pests.  Stressors may be impactful at various scales, some may operate locally, others more regionally and some have global effects.  And the wide ranging effects associated with global stressors such as climate change may exceed or intensify the effects of local or regional stressors like air pollution or dust impacts.  And while land owners may only be able to directly manage local and regional stressors, it is important to consider the direct and interactive effects of global stressors.

Disturbances and stressors often interact with one another resulting in profound ecosystem impacts.  This is a common dynamic in forested ecosystems in North America. For example, between 2012 and 2016 California experienced a significant drought and the long duration of low soil moisture placed water stress on trees, causing them to become more susceptible to bark beetles and pathogens. This synergistic interaction among water stress, bark beetle and pathogens in context of long standing fire suppression collectively contributed to the death of over 100 million trees in the state.

When managing for a resource it is important to consider disturbances and stressors individually as well as interactively.  And noting which factors among them are most impactful and then which can be managed allowing for the greatest return for investment.