Cultivating climate adaptation and mitigation at the Agrifest in the U.S. Virgin Islands

Agriculture from Brown to Green in 2016

“Agriculture from Brown to Green in 2016”, was the theme of the 45th Annual Agriculture and Food Fair of the U.S. Virgin Islands celebrated in the island of St. Croix on February 13-15, 2016. The Agrifest is the biggest agricultural fair in the Caribbean and a delightful exhibition of colorful crops and livestock production. But this year the theme of the event described the “rare and unusual extreme drought conditions which challenged farmers in the Caribbean”, expressed Sr. Kenneth Mapp, governor of the U.S. Virgin Islands (USVI). 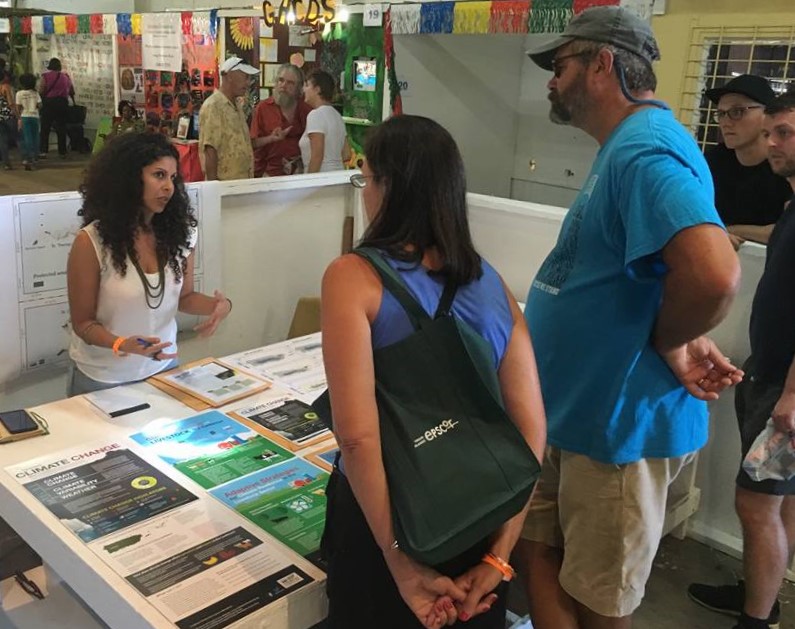 The “brown spell” or extreme drought of 2015 took a toll on crops and livestock in the USVI, like in Puerto Rico. Farmers and ranchers lost a significant amount of fruit trees, garden vegetables, cattle, sheep and goats due to the drought. The drought has also created a sharp increase in bush fires on St. Croix and in St. John. 2016 is expected to get worse since forecasts predict another long, dry season and higher than normal temperatures. January 2016 was already about 1.13 degrees Celsius warmer than the average, according to NASA. The crops and animals in Puerto Rico and the USVI haven't recovered from the stress caused by the past drought, and the climate outlook for this upcoming months show the prevalence of dry conditions and water shortages, which could have a detrimental effect in the already susceptible and fragile Caribbean agricultural sector.

It is yet unclear if 2016 will be hotter and drier than 2015, but the message is that this drought was not an isolated event and that the dry season in Puerto Rico and the USVI is becoming longer and hotter, a phenomenon associated with global climate change. The Caribbean is one of the regions most susceptible to climate change effects such as sea level rise, increased temperatures, decreased precipitation, and greater severity of hurricanes and storms. Therefore, the Caribbean population, farmers and ranchers in particular, need to adopt strategic measures and sustainable land management practices to reduce their vulnerability to climate change effects.

To help build climate resilience, the Caribbean Climate Hub hosted an educational booth at the Agrifest 2016 to raise awareness about climate change effects in the region and to bring information to producers and agricultural advisors of adaptation strategies and land management practices that can help reduce the vulnerability of working lands to extreme weather events. The aim was to improve local knowledge of climate risks and adaptation options, and help producers integrate science approaches to address these challenges. Using maps and graphics of the new climate projections for Puerto Rico, we were able to communicate what are the forecasted changes in temperature and precipitation patterns at the short, medium, and long-term, and discuss the potential implications of these climate changes for agriculture and forestry in the region like reduce yields, increased crop prices, and higher risk of pest and diseases.

By talking to farmers and concerned citizens that lost their crops and home gardens to the drought, we learned about the local traditional knowledge for dealing with climate uncertainty and variability, such as strategies related to rainwater harvesting and recycling. We also learned that a large number of fruit trees perished or were damaged by the drought, particularly papayas, bananas, citrus and coconut trees. Our partners at the University of the Virgin Islands, the U.S. Virgin Islands Department of Agriculture (VIDOA), and USDA agencies like NRCS, are actively helping farmers deal with climate-related issues through extension services and education. To help in this endeavor and increase climate resilience in the USVI, the Caribbean Climate Hub will partner with the V.I. Department of Agriculture, the UVI Cooperative Extension Service and NRCS to develop a series of webinars and workshops to provide technical assistance for climate change adaptation and mitigation.

According to Prof. Olasses Davis of the Cooperative Extension Service, the St. Croix White Hair Sheep and the Senepol Cattle “are drought tolerant animals that are better adapted for the climate of the USVI. One of the characteristics of the Senepol cattle is that it is breed for grazing throughout the hottest part of the day. They also can survive several days without drinking water”.

Livestock farmers in the USVI should use these drought and heat-resistant breeds to minimize herd losses and to maintain production during drought conditions.

Caribbean Climate Hub partners of the USDA NRCS Caribbean area also had and booth at the Agrifest and were educating about soil and water conservation practices and technologies that can help producers be more resilient and efficient, including the use of cover crops, crop residue management and how to collect and store runoff from precipitation (PDF).