Drought Effects on Forests and Rangelands in the US Caribbean

Issues of water quality and scarcity are of great concern across the U.S. Caribbean. In recent years Puerto Rico and the U.S. Virgin Islands have experienced uncommonly dry weather that has caused moderate to severe droughts. In 2014-2015, severe drought in Puerto Rico required the implementation of water restrictions that affected millions of people. The summer of 2015 was the third driest period in Puerto Rico since 1898, forcing the strictest water rationing in its history. Emerging climate models for the region (Figure 1) predict an overall decrease in precipitation over the next century, but also to greater variance in seasonality and an increase in intense precipitation events1 . The temporal and spatial distribution of rainfall can have profound effects on the hydrology as well as the phenology and life-cycle of trees, rangeland species, pests and pollinators. Changing rainfall patterns will mean major adjustments in how working lands are managed by producers and planners. 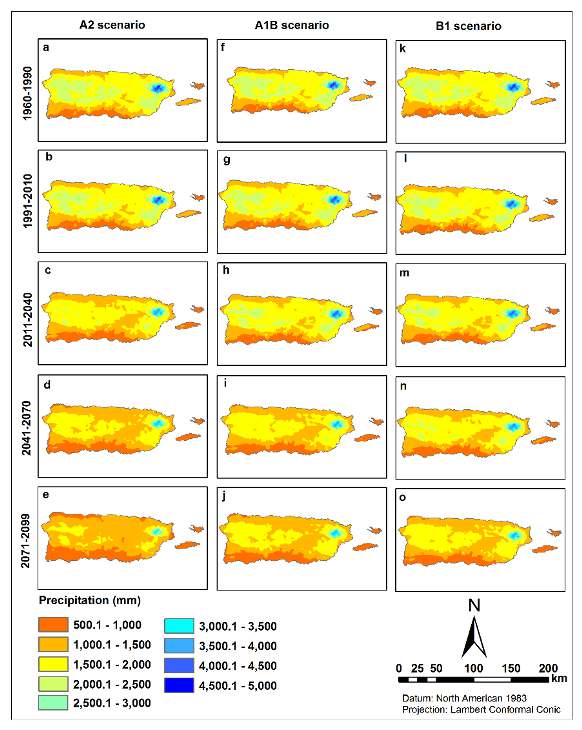 Puerto Rico and the U.S. Virgin Islands have a tropical climate. Forests are primarily made up of broadleaf evergreen trees (Figure 2). They are very diverse in terms of tree species, with a mix of 500 native and many introduced species. The principal value of forests are for watershed and coastal protection, recreation, habitat and the maintenance of biodiversity. There is an emerging timber sector and high potential for growth in timber production. Rangeland and pasture for hay are an important resource for the agricultural community.

Desiccation and heat stress are leading to decreases in crop yields, increased mortality in both crops and livestock, and an increase in expenditures for feed, irrigation water, and energy. In St. Croix, USVI, the recent drought has parched pastures, dried up ponds, and killed a large number of livestock. In Puerto Rico, the lack of rain during the first months of 2014 led to losses in agriculture estimated at $20 million and affecting about 4,000 farmers. Over 2,500 livestock farms (28% of all livestock farms) were damaged by drought, with dairy farms and cattle ranches being strongly affected. Lack of rain reduced the availability of hay, which is the principal source of feed for cattle, goats, and sheep. These forced farmers needed to buy costly imported concentrated feed.

According to the Puerto Rico’s State of the Climate 2010-2013 report, four major climate change stressors may affect the island’s dominant forest types (Figure 3):

Stressors are predicted to have varying effects on climatic zonation, forest cover, and management practices in forestry and agriculture. General conclusions about the anticipated outcomes and consequences include:

Intercropping, silvopasturing, and agroforestry practices are strategies to benefit from increasing levels of available CO2 and N while moderating ambient temperatures and moisture loss from evapotranspiration. However, demonstrations in the region are needed to alter current practices and promote sustainable practices, including:

The forestry and agricultural sector in the U.S. Caribbean is governed more by economic and social factors than climate. There is a renewed interest among government agencies and the public in revitalizing the timber and forest products industries as a way to improve local sustainability, economies, and quality of life.