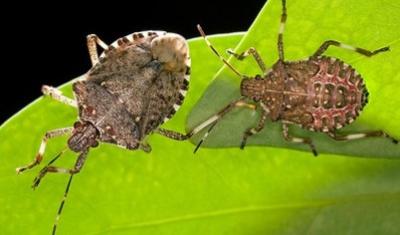 The brown marmorated stink bug (BMSB), Halyomorpha halys, originally from East Asia, is an invasive pest that is present throughout much of the United States. You may have noticed this nuisance pest in your home (see picture). It is attracted to the outside of houses on warm fall days in search of overwintering sites and can enter houses in large numbers. The brown marmorated stink bug is also a serious economic threat to fruit crops, garden vegetables, and many ornamentals. In a changing climate, agricultural losses from insect pests like BMSB are expected to increase.

USDA ARS scientists are fighting back by developing traps, sequencing the bug’s genome, and testing parasitic wasps as biocontrols. Midwest Climate Hub research fellow, Dr. Erica Kistner-Thomas is contributing to that fight through modeling the potential distribution and abundance of BMSB under future climate scenarios using a bioclimatic niche model. Her results indicate that crop losses from BMSB in Northern states may increase as rising temperatures will likely enable BMSB to further expand its range northward as well as enhance BMSB survival and reproduction.

Climate Change Impacts on the Potential Distribution and Abundance of the Brown Marmorated Stink Bug (Hemiptera: Pentatomidae) With Special Reference to North America and Europe