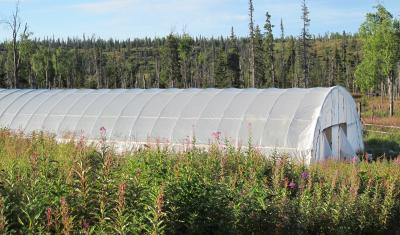 Case Study Background
Ridgeway Farms is a homestead family farm located eight miles east of Kenai and is part of the Kenai Peninsula farming community. Abby Ala and four generations of her family have been working the land since 1948. Currently, they generate most of the farm’s income from fruit and vegetable production for a Community Supported Agriculture (CSA) group. The main farm includes 35 acres of land in vegetable production and horse pasture, 35 acres of hay fields, and an additional 20 acres in hay production. The farm produces and sells Timothy hay and offers horseback riding lessons, in addition to limited boarding.

Management Goals
In 2018, one of Ridgeway Farms primary management goals was to increase CSA membership from 51 to 70, and to support additional restaurants. Vegetable production for the CSA occurs in 14 high tunnels and interspersed small gardens. Ridgeway Farms uses hydroponics systems, single crop rotation, and modifies their selection of vegetable and fruits every year to maintain production from April to August. The goal is to grow and produce a variety of vegetable and fruit crops for a 4-month period to help increase revenue of crops for CSA production. To help accomplish this goal, the farm is working with the Natural Resources Conservation Service (NRCS) to increase existing high tunnels, hydroponics, irrigation systems, and planning the future installation of a new well to help with irrigation.

Ridgeway Farms is a primary source of Timothy hay (Engmo variety) for the Kenai Peninsula, producing one cutting of hay per growing season across two land parcels. The goal is to increase annual hay production, with the potential of more than one cutting if a longer growing season allows it. To increase pasture quality and rotational grazing on seven, small pastures, Abby and her family are working with NRCS to increase soil organic matter by spreading composted manure and by splitting pastures into smaller systems using electric fencing.

Climate Change Impacts
Temperature in Alaska has been rising at twice the global rate, with 2019 setting the record for warmest year. Annual precipitation is expected to increase in many areas, but higher average temperatures may alter the timing and reduce the amount of water available for agriculture. Several climate change impacts could affect Ridgeway Farms and other operations in the Southcentral region. As a result of changes and increased variability of seasonal temperature and precipitation, several related opportunities and challenges are expected:

Opportunities and Challenges
According to Abby Ala, the farm has recently experienced warmer winters and earlier springs, which can be helpful for earlier spring planting dates. The warmer winters are resulting in less snow cover that can lead to greater damage of overwintering vegetation due to lack of insulating snow cover. The longer growing season and warmer summers have enabled the expansion of garden varieties, but have also resulted in an increase of pests, diseases, and non-native (invasive) plant species previously not seen on the farm. Expected future climate challenges include an increased intensity of new and invasive weeds, which could negatively affect the goal of producing high quality hay. Weeds will also affect vegetable and fruit gardens. Some of the strategies to overcome these challenges include increased mowing and rotation of pastures, with the drawbacks of the time to mow pastures and cost of fencing. Potential opportunities from climatic change include an increase in grazing days for livestock so less hay is needed. There may also be an opportunity to gain a second hay cutting each year. Under warmer conditions, the continued use of high tunnels will expand the growing season and increase production, while higher temperatures could expand the variety of fruits and vegetables that can be grown. Warmer conditions throughout the year may allow for the use of black irrigation pipe that can absorb daytime warmth during winter days and thus avoid freezing overnight. Outside vegetable production may also benefit from warmer summers that help to lengthen the growing season.

Monitoring
It is recommended that the implemented tactics be evaluated daily and/or seasonally for each component of the farm to help ensure success. A nutrient management plan has been recommended to assist in determining efficient use of fertilizer and manures. Initiating records on daily temperatures of high tunnels, as well as outside weather conditions will assist in refining the length of growing seasons as well as optimizing when and what varieties to plant. Maintaining a record of cost of new equipment, wells, high tunnels supplies, and other expenses will help to determine the success of implementing the recommended tactics.

If you're looking for information to complete your own adaptation project, Adaptation Resources for Agriculture in Alaska is a resource available to guide you through the process with information specific to Alaska.