After a few years of drought, including extreme droughts in 2021 and 2015, forests are showing signs of drought stress (scorched leaves and needles, flagging), and some trees have died. Many foresters and small woodlot owners are considering what they should plant that will survive current and future climate conditions. Future climate projections show increases in temperature that may occur faster than plant populations can adapt or move (migrate or disperse). For example, in Oregon, the annual average temperature has already increased by 2.2 °F since 1895. If greenhouse gas emissions are not reduced, the average temperature in Oregon could increase by 5 °F by 2050. To connect these temperatures to plants, consider that the USDA Plant Hardiness Zones, which are used as general guidelines for planting garden and horticultural species, differ by 5 °F per zone. Species-specific seed zones or breeding zones also differ by temperature by about 3.6 °F on average. Across the Northwest and worldwide, projected increases in temperature will result in forest stands that are no longer adapted to local climate conditions. This presents natural resource managers, forest landowners, and forest industry with a significant challenge in making decisions about which trees to plant during reforestation projects. 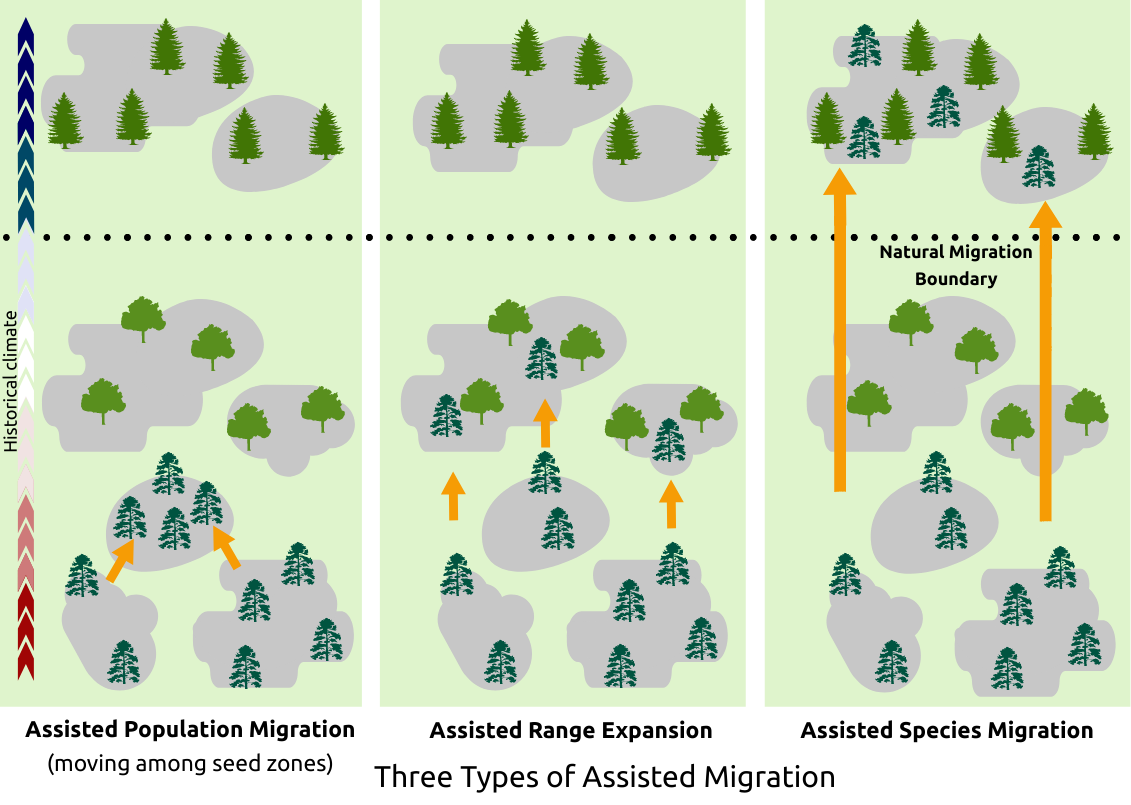 This simple graphic demonstrates each type of assisted migration using a conifer icon, though the three types of assisted migration are applicable to all plants (deciduous trees, shrubs, etc.). In the graphic, different seed zones are represented by distinct grey areas, and orange arrows represent the movement of plant material from one seed zone (or population) to a new location. In the graphic, the historical climate notes the movement of plant material from warmer climates to historically cooler climates.

General guidelines when choosing the plant material for reforestation include:

Consider changing how you plant material:

Assisted migration summary from the US Forest Service

Preparing for climate change: forestry and assisted migration in the Journal of Forestry

An explanation of assisted migration for nursery managers and tree plants in the journal: Tree Planters’ Notes.

An overview of ideas, issues and realities of assisted migration for climate change adaptation in forests in the Proceedings of the 60th Annual Western International Forest Disease Work Conference.

Assisted migration poleward rather than upward in elevation minimizes frost risks in plantations in western Canada in the journal: Climate Risk Management.

A list of Northwest Vulnerability Assessments for the region, by sector including forestry and by state.