A deeper-dive into early snowmelt 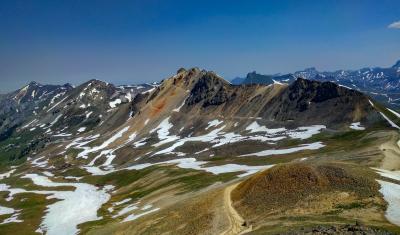 For nearly two decades we have seen west-wide shifts in the hydrologic cycle including less water held in the snowpack, earlier runoff, less precipitation falling as snow and lower summer streamflow. The high Colorado Mountains, once considered relatively resistant to climate change, have recently undergone similar changes, even in the highest mountains of the southern Rockies. These changes, however, are not the same west-wide – there are important regional differences.

Of our iconic western rivers, the Rio Grande offers a good example of how “climate-change-induced flow declines might sink a major system into permanent drought” (Dettinger et al. 2015).  We now have nearly 40 years of daily measured SNOTEL data in the Upper Rio Grande to test if the projected impacts of climate change appear in the observed snow record. They do.

Chavairra and Gutzler recently reported a decline in Upper Rio Grande April 1 snow water equivalent (SWE; the amount of water held in the snowpack) of 25% between 1958 and 2015. The SWCH evaluated the details of observed hydrograph shifts at the oldest Upper Rio Grande SNOTEL sites (n=16). We found that on a regional basis:

Possible implications the earlier snowmelt window suggested by scientists at the 2019 Universities Council on Water Resources & National Institutes for Water Resources meeting include:

These observed trends could be due to reduced snowfall, increased sublimation and lower snow albedo due to increased dust loading on spring snowpack.