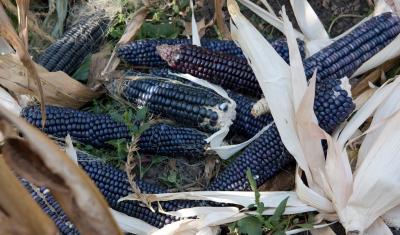 Food sovereignty is “the right of peoples to healthy and culturally appropriate food produced through ecologically sound and sustainable methods, and their right to define their own food and agriculture systems.” By addressing food sovereignty, tribes are rebuilding resilient agriculture in their communities, ecosystems and agroecosystems.

The SW Hub attended the National Adaptation Forum in April, and contributed to a session on "Climate Change at the Intersections: Addressing Cross-Sectoral Concerns in Indian Country."  In our presentation, we had originally intended to review successful stories of climate adaptation in tribal agriculture, drawing upon examples in publicly-available adaptation planning documents. Many tribes across the nation have been involved in climate change adaptation planning and we found several online resources that list tribal adaptation activities including the University of Oregon Tribal Climate Change Guide - Adaptation Plans, the University of Arizona Native Nations Climate Adaptation Program's map of Tribal Adaptation Plans, and the BIA's Tribal Resilience Program Awards map.

We thought it would be straightforward to review how tribes are adapting their agricultural activities to build resilience to a changing climate, but when we used "adaptation" as a search term, we found few examples of agricultural adaptation success stories. We soon realized that we were thinking too narrowly in confining our research to technical solutions for climate change impacts. We really needed to understand the context of tribal agriculture and food security with respect to the institutional inequities imposed by Federal Government policies over the last two and a half centuries.

To quote from the Indigenous Food and Agriculture Initiative's recent report  "An Assessment of Risks and Opportunities for Native Communities in the 2018 Farm Bill", Native American agriculture is "a tale of two worlds" (Hipps and Duren, 2017). Indigenous people have been farming in North America for over 7,000 years domesticating a wide variety of crops and developing complex agricultural systems. Many traditional practices developed over millennia are still in use today and play a significant role in tribal culture. However, the arrival of European settlers and subsequent nineteenth-century U.S. territorial expansion saw the enforcement of treaties and Federal Government removal and reservation policies which separated tribes from the land and water resources that had supported their people for centuries. Later, federal policies switched to assimilation - the 1887 General Allotment Act aimed "to extinguish tribal sovereignty, erase reservation boundaries, and force the assimilation of Indians into the society at large" and coerced tribal peoples to adopt mainstream farming and livestock practices, often in locations that were less than ideal for such activities.

In short, centuries of government policy have eroded tribal access to traditional lands, disconnected tribal communities from their traditional food systems, disrupted trade relationships between tribes, increased dependence on food distribution programs and created barriers for accessing agriculture programs (Hipps and Duren, 2017). The result has been impoverished tribal communities with little access to fresh foods, and increasing levels of obesity and type-2 diabetes. Given this context of injustice, talking about adapting tribal agriculture to climate change is too simplistic.

We realized we needed to be thinking and talking about food sovereignty and how numerous Native American food sovereignty initiatives are already building resilience in communities, ecosystems and agroecosystems. First coined in 1996 by La Via Campesina, food sovereignty means “the right of peoples to healthy and culturally appropriate food produced through ecologically sound and sustainable methods, and their right to define their own food and agriculture systems.” Charlotte Coté (Tseshaht/Nuu-chah-nulth First Nation and Associate Professor at the University of Washington) explains further that "“Indigenizing” food sovereignty moves beyond a rights-based discourse by emphasizing the cultural responsibilities and relationships Indigenous peoples have with their environment and the efforts being made by Indigenous communities to restore these relationships through the revitalization of Indigenous foods and ecological knowledge systems as they assert control over their own foods and practices."

Final word: of course "adaptation" plays a role in preparing tribal agriculture for climate change - but if you want to read about success stories - look for "Food Sovereignty." See below for links to a selection of Food Sovereignty initiatives and projects.

Feast for the Future

How the Navajo Nation Is Reclaiming Food Sovereignty