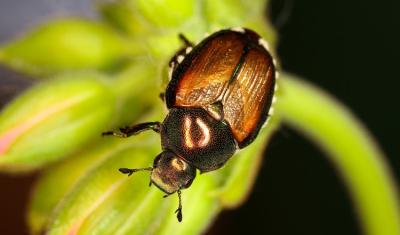 The Japanese beetle (Popillia japonica Newman) is a highly destructive plant pest of foreign origin. It was first found in the United States in 1916 and has since spread to most states east of, and immediately to the west of, the Mississippi River. It has also spread to some western States, but tough regulations and careful monitoring have prevented its establishment elsewhere. The Japanese beetle has become a serious plant pest and a threat to American agriculture.

Both as adults and as grubs (the larval stage), Japanese beetles are destructive plant pests. Feeding on grass roots, the grubs damage lawns, golf courses, and pastures. Attacking foliage, flowers, or fruits, the adults feed on more than 300 different ornamental and agricultural plants. Scientists with USDA’s ARS and APHIS have developed an integrated pest management (IPM) program that combines biological, cultural, and chemical strategies. In support of this plan, the Midwest Climate Hub Fellow, Dr. Erica Kistner-Thomas modeled how climate change may impact the distribution and voltinism (generations produced per year) of  the Japanese beetle. Model projections indicate increases in temperature would enable northward range expansion across Canada while simultaneously shifting southern range limits in the United States northward.

The Potential Global Distribution and Voltinism of the Japanese Beetle (Coleoptera: Scarabaeidae) Under Current and Future Climates