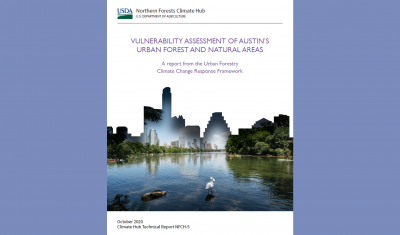 How are urban forests vulnerable to climate change?

More than 8 in 10 people in the United States live in urban areas, and these areas continue to grow. Urban forests provide benefits to the people who reside in cities, including energy conservation, aesthetics, recreation opportunities, stormwater control, and property value. We have assessed the vulnerability of urban forests to climate change and developed adaptation strategies that help maintain and improve the benefits of urban forests to people.

The trees, developed green spaces, and natural areas within the City of Austin’s 400,882 acres will face direct and indirect impacts from a changing climate over the 21st century. This assessment evaluates the vulnerability of urban trees and natural and developed landscapes within the City Austin to a range of future climates.

Summary and Highlights of the Assessment

More on the assessment

The Balcones Canyonlands Preserve (BCP) is a system of preserves of over 30,000 acres that provides habitat for endangered and rare songbirds, karst invertebrates, plants, and aquatic salamanders. Managers at the BCP used information from the Austin Vulnerability Assessment and the Adaptation Workbook to develop adaptation tactics for their vireo preserve. Learn more about this project at the Climate Change Response Framework website (external link).