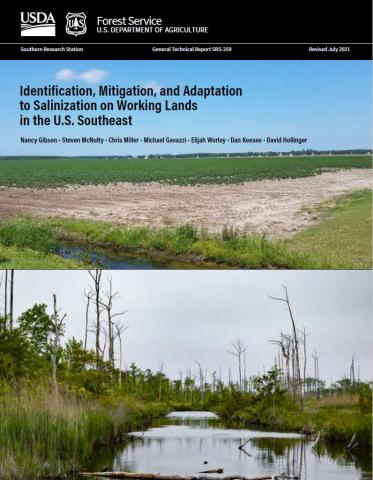 Download  Identification, Mitigation, and Adaptation to Salinization on Working Lands in the U.S. Southeast to learn how to identify the stage, cause and likely progression of salinization on working lands, mitigation options if possible, and if not, adaptation strategies that are available.

View this video to learn more about the Identification, Mitigation, and Adaptation to Salinization on Working Lands in the U.S. Southeast manual

We want to hear from you.  To provide the best available guidance, we will update this manual after producers and specialists have had a chance to implement the guidance, assess recommendations, and provide feedback.  Please send all comments and suggestions for improving this manual to Michael Gavazzi, USDA Southeast Climate Hub, at michael.gavazzi@usda.gov. 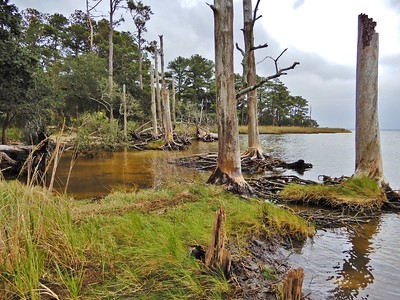 Coastal forests and farmlands in parts of the Southeast are being negatively affected by saltwater intrusion and soil salinization due to sea level rise, storms, tides, droughts, and water resources management. Elevated salinity levels cause crop yield declines, coastal forest loss, increases in salt-tolerant invasive species, eutrophication and marsh migration. Vegetation stressed by salinization is more susceptible to mortality by events such as droughts, hurricanes, and fires. Salinity and salinization can also cause clay dispersion that reduces soil drainage capacity, increases nutrient release that can lead to algal blooms and fish mortality, and degraded groundwater for irrigation.


Land Vulnerability and Drivers of Change

Elevation, subsidence (e.g., the sinking of land due to natural and human-caused factors), and drainage all influence the vulnerability of lands to saltwater intrusion and salinization. Coastal forests and farms are particularly vulnerable to salinization due to their low elevation, proximity to oceans, and high rates of soil subsidence. In addition to these factors, the following drivers also contribute to the increased risk of salinization on coastal forests and farms: 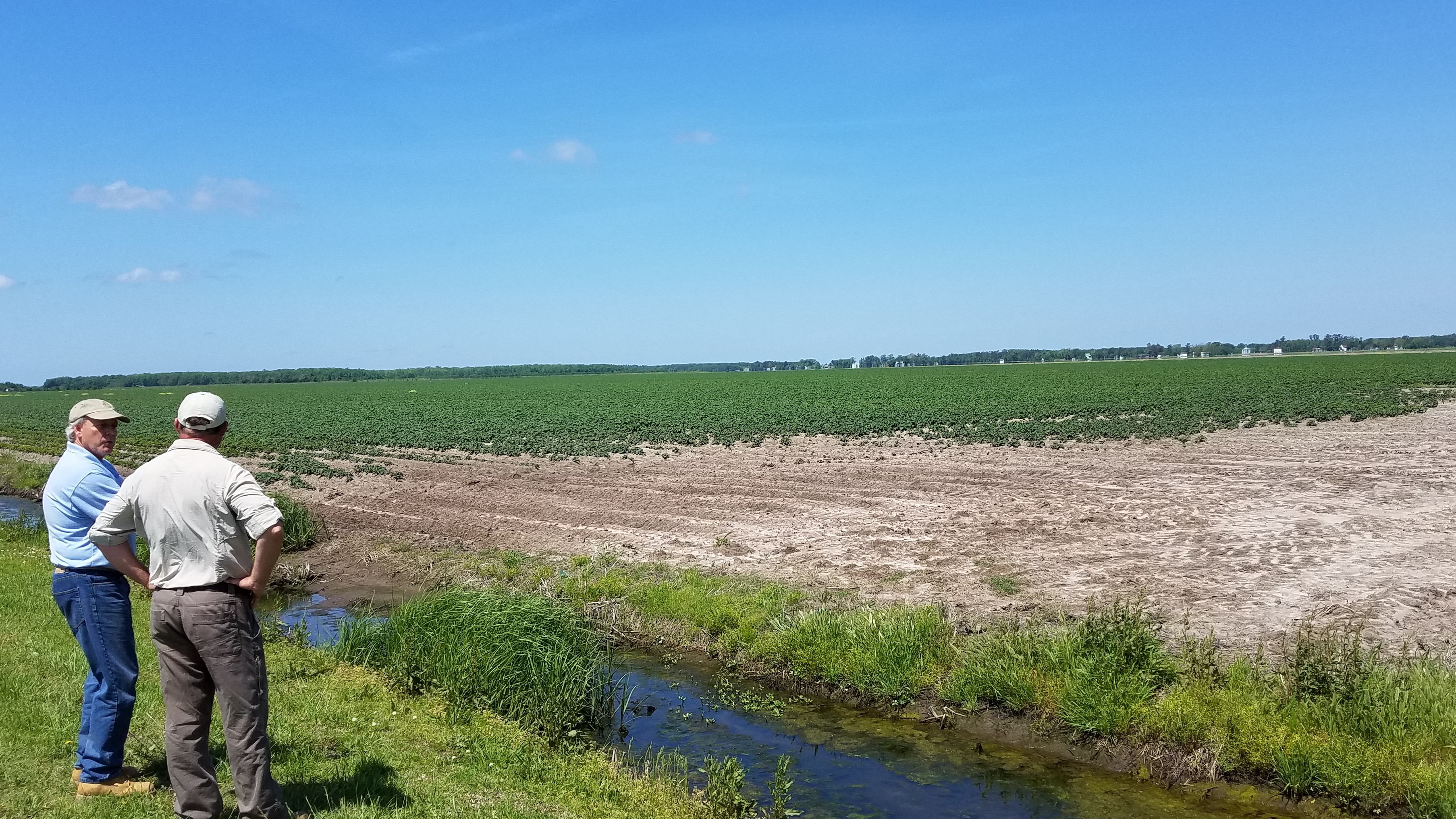 Predictions of sea level rise are available on the NOAA Sea Level Rise Viewer, which provides visualizations of U.S. coastal areas most vulnerable to salinization and inundation through sea level rise. For example, the North Carolina Albemarle-Pamlico Peninsula has a high rate of sea level rise and is projected to lose about half of its land area to open water with a 3-foot rise in sea level by the end of the century.

Screenshots from the NOAA Sea Level Rise Viewer showing parts of the east coast, including North Carolina’s Albemarle-Pamlico Peninsula, at the current sea level (left) and with a 3-foot rise in sea level (right).


What are We Doing to Address Salinization Issues in the Southeast U.S.? 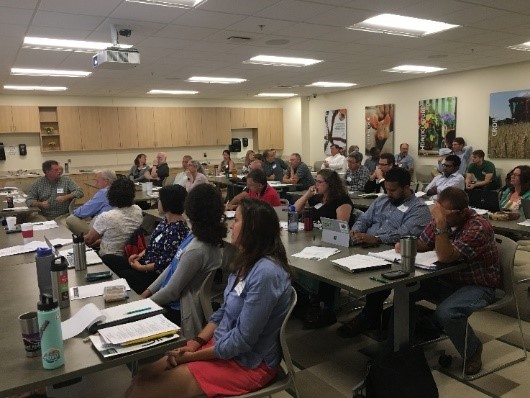 The USDA Southeast Climate Hub is working with federal, state, and local public and private groups to better understand the current and projected rate and extent of saltwater intrusion, monitor salinity levels and impacts on crops and forests, and inform producers about adaptation options to improve resilience to saltwater intrusion and soil salinization.

During October 2019 the Southeast Hub hosted a workshop with local and regional subject matter experts to share knowledge and develop plans for addressing salinization issues in the region. The workshop was sponsored by the State Climate Office of North Carolina, and Director Kathie Dello gave the keynote address. Invited speakers gave short talks describing their research, what they know about current and future salinity issues, and management options for improving productivity and resilience of working lands. Group discussions followed each presentation to allow for questions and information sharing.

Information learned during and after the workshop was used to develop Identification, Mitigation, and Adaptation to Salinization on Working Lands in the U.S. Southeast, a soil salinization mitigation and adaptation manual for farm and forest management. The manual will allow land managers to identify the stage, cause, and likely progression of salinization on their land, mitigation options if possible, and if not, adaptation strategies that are available.

Workshop presentations can be viewed by selecting the links below: 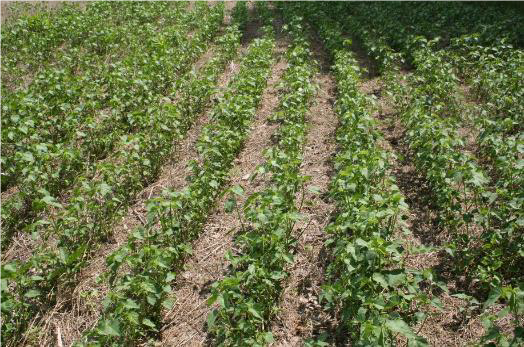 Adaptation options include growing alternative crops, developing salt tolerant crops, planting salt tolerant plant buffers, or applying for a wetland easement. Remediation options have shown varied success and are dependent on site-specific characteristics. For example, applying gypsum and leaching with non-saline freshwater may be able to restore the soil in well-drained areas with sufficient freshwater availability. Salt-tolerant crops, such as seashore mallow (right), have shown promise as non-traditional crops for biofuels and biodegradable absorbents.

There is a lack of knowledge on the economic costs and benefits associated with adaptation options. Depending on the region these economic factors can vary, which makes the decision to use new management practices site-specific. Solutions to salt water issues are promising in theory but must be profitable in practice to be useful to farmers and land managers. It will take time to understand how these solutions perform in practice and to identify the regional markets for alternative crops.