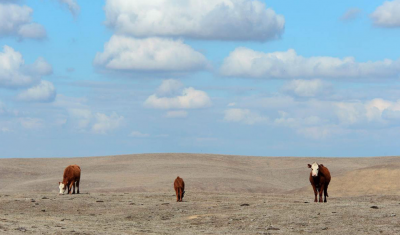 The following content is from a publication from the Forest Service Office of Sustainability and Climate, the full content can be viewed/downloaded in PDF

Droughts can result in reduced growth rates, defoliation, and increased stress on vegetation, with accompanying ecological, economic, and social effects in rangeland areas. Droughts may be caused by a reduction in precipitation or an increase in temperature. These “hot droughts” reduce the supply of water through increased evaporation and faster melting of snow and ice. During these droughts, plants increase their demand for water through increased evapotranspiration and longer growing seasons. (Udall & Overpeck, 2017).

Droughts have been increasing in frequency and severity over the last 50 years in much of the United States (Figure 1) (Peters, Iverson, & Matthews, 2014). This trend is expected to continue in the future, particularly in the Central Plains and Southwest rangelands (Cook, Ault, & Smerdon, 2015).

Figure 1 - Cumulative Drought Severity Index (meteorological drought) compared over two time periods (1960–1986 and 1987–2013) (Peters et al., 2014). Click here to learn more about this dataset and zoom in to your area of interest. For an annual comparison of relative moisture surplus and deficit from 2000–2016 (in 3-year increments), view a time series webmap here.

In the 1930s Dust Bowl, portions of the Midwest were transformed into a “moonscape, empty and hideous,” with no plants or wildlife to be seen (Egan, 2006). This is an extreme example of the effects of drought and poor soil management, but even moderate droughts can have profound ecological effects.

Some of the most profound effects of drought are on soils. As plant cover and water availability declines, soil temperatures increase and soil chemistry changes (Sanaullah, Rumpel, Charrier, & Chabbi, 2012). Soil acidification and salinization can occur, microbial activity can decline, organic matter in the soil can decrease, and soil runoff and erosion can increase. These changes can affect carbon and water storage: for any given soil type, the amount of water may double or triple, depending on how much carbon is in the soil (Saxton & Rawls, 2006).

These variables create feedback loops: as plant cover and water availability decline, this leads to changes in soil quality, which further reduce plant cover and water storage in the soil. These feedback loops worsen the effects of drought. In addition, drought may also lead to increased fire activity in some regions, which has further ecological consequences on the system (Westerling, Gershunov, & Cayan, 2003).

Moreover, because cheatgrass spreads fire more readily than perennial grasses (Klemmedson & Smith, 1964) and fire can promote the spread of invasive species, this can act as a positive feedback loop for the spread of fire and invasive species (Abatzoglou & Kolden, 2011; Finch et al., 2016). By drying out fuels and increasing the stress on native vegetation, drought can drive this loop to further spread fire and invasive plants (Abatzoglou & Kolden, 2011). Researchers find differential sensitivity to drought in different species, among both native and invasive plant species (Alpert, Bone, & Holzapfel, 2000; Cavaleri & Sack, 2010; Heberling & Fridley, 2013). While some plant species steadily decline in productivity as drought increases, others show rapid declines past some threshold (Reeves et al., in preparation). Some warm-climate plants are better adapted to drought and can respond quickly with rapid bursts of productivity when precipitation increases (Reeves et al., in preparation).

There is also variation by climatic region. Research by Smith (2017) found that arid rangelands were more sensitive to droughts than mesic rangelands, both in their productivity and in vegetation community responses to drought (see also Tielbörger et al. (2014). Additionally, sensitivity to drought varies over time. Arid regions are affected in the first year of a drought while plant communities in mesic regions are not strongly affected until the third year, with differences in recovery times as well (Smith, 2011).

Overall, drought indices only explained around 40 percent of the difference in productivity in some rangeland systems; the rest of the variation may be due to differences in soils, vegetation, topography, and other factors (Reeves et al., in preparation). While programs such as the United States Drought Monitor provide valuable information on drought intensity, they do not account for all the differences in local vegetation productivity. The greater sensitivity of arid rangelands to drought is also relevant in the face of continued climate change. As mesic systems become more arid, they may also become less resilient to year-to-year fluctuations in rainfall.

Drought and Rangeland Livestock and Wildlife

Droughts affect not just rangeland plants and soils, but the entire ecological and social systems that depend on them. Lower plant productivity means fewer arthropods, which means fewer sage grouse (Gregg & Crawford, 2009; Guttery et al., 2013). This also means less forage and water available for ungulates and other herbivores, which can reduce their survival (Bender, Lomas, & Browning, 2007; Frank & McNaughton, 1992).

These effects extend to livestock production and to the local economies that depend on these animals. In 2013, following a major drought, the U.S. calf crop was the lowest since 1951, according to the National Agricultural Statistical Service (NASS) (2017), and major feedlots were forced to close. Several years later, cattle businesses were still recovering.

Drought is complex. Managers should use an integrated and coordinated approach to manage rangeland vegetation, water, and soils, in order to maintain healthy rangeland communities before and after droughts. The timeframes for improving resilience to the effects of drought fall into three categories: pre-drought, during drought, and postdrought.

This is an excerpt taken from a synopsis of presentations given in a webinar by the Forest Service, with support from the USDA climate hubs, in June 2017. Presentations highlighted the direct and indirect effects of drought and how they affect the demand for recreation activities. The full synopsis is available as a PDF.

References made on this page can be found in full text pdf.