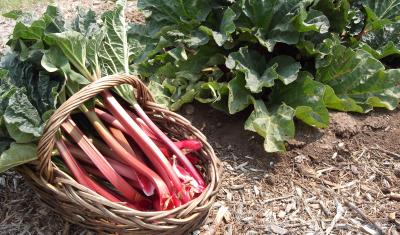 Case Study Background
Bushes Bunches Produce Stand is a family owned business that has been providing produce to Palmer and the surrounding areas of Wasilla and Anchorage since 1954, when Alaska was still a territory. The 14-acre farm produces table and seed stock potatoes, along with a variety of other vegetable and nursery crops. The farm is widely regarded for its rhubarb, which was planted in the mid-1950s, and for its unique Bushes Peanut Potato cultivated by Bruce Bush. Bushes Bunches Produce Stand manages several farm-related businesses, including a retail shop for produce and dry goods sales, a winter produce market, online and wholesale produce sales to restaurants and others, and a booth at the annual Alaska State Fair.

Management Goals
In 2018, the main management goal for Bushes Bunches Produce Stand was to expand production, particularly for potatoes and rhubarb. They planned to add new produce stand locations in Wasilla, expand current retail, and increase sales to restaurants and at the State Fair. To reach these goals, they are seeking more land to increase production, planning for additional irrigation infrastructure in dry-soil areas, and plan to build a new potato washing shed and barn to accommodate expanded yields. Bushes Bunches Produce Stand also plans to expand their Palmer retail location and continue to increase value added products such as seasonal rhubarb lemonade and “dinner prepped” zucchini, squash, cabbage, beets, and turnips. They add a variety of produce from other farms to help draw customers and meet demand across businesses.

Climate Change Impacts
Temperature in Alaska has been rising at twice the global rate since the middle of the 20th century, with 2016 setting the record for warmest year. Annual precipitation is expected to increase in many areas, but higher average temperatures may alter the timing and reduce the amount of water available for agriculture. Several climate change impacts could affect Bushes Bunches Produce stand and other farms in Southcentral Alaska:

Opportunities and Challenges
Climate change impacts are already apparent and expected to increase on the farm in several ways. A milder climate is likely contributing to more people moving to and living in areas surrounding the farm, which increases the potential to expand existing markets and meet future production demand. Nearby land development does have negative consequences, such as decreasing available land for agriculture, increasing land prices, and impacting water quality and quantity. A longer growing season, due to warmer winters and earlier springs, is useful to overall production. According to Bushes Bunches Produce Stand, in the recent past the farm has experienced more sunny days during the year, shorter and warmer winters, and earlier spring snowmelt. These changes can result in a longer growing season to allow for more plant growth and larger sized produce. Disadvantages of these changes include more pests and pathogens as well as plant stress that has led to bolting, particularly for the radish and turnip crops. Some recent challenges include an increase of invasive species like slugs and chickweed. Moose have also become a more frequent problem, which could be an indirect result of climate change impacting the timing and abundance of food availability for local wildlife, along with the predisposition of moose to train their young about food sources, according to Bushes Bunches Produce Stand.

Management Objectives & Adaptation Actions
A top priority for Bushes Bunches Produce Stand is to expand production and marketing of their infamous Peanut potatoes (a cross between Yukon gold and fingerling potatoes). In order to adapt to variable seasonal conditions, their approach has been to plant and harvest as late as possible to maximize prolonged summer growing potential, remaining flexible based on the timing of the last spring and first fall frost.

Additional management objectives include weed control, which is currently done by spraying the potato crop and rotating a variety of vegetables sold at market. These approaches have led to a noticeable decrease of slug damage, particularly to the rhubarb crop. Bushes Bunches Produce Stand has developed a long list of adaptation approaches and strategies, with a focus on potato production. To improve and maintain soil health, the farm is considering fallowing potato fields every three years to cover crop with an oat and pea combination. While taking the fields out of production is perceived to have potential short-term financial drawbacks, NRCS promotes cover cropping due to its nutrient adding potential that builds long-term soil resilience and improves water-holding capacity. As air and soil temperatures warm and growing seasons lengthen, additional irrigation needs are anticipated across the farm. To conserve water and build resilience in anticipation of increased demand on water resources, they are considering implementing drip irrigation. While this approach requires time and financial investment, providing direct water contact to the plants will allow the farm to continue growing water-intensive crops like squash and rhubarb.

Monitoring
Long-term management and adaptation strategies will be informed by trials of vegetable and potato varieties suitable to future climate conditions in Palmer. These experiments are underway with help from the Alaska Cooperative Extension Service.

Click here to access a two-page report. If you're looking for information to complete your own adaptation project, Adaptation Resources for Agriculture in Alaska is a resource available to guide you through the process with information specific to Alaska.