Pollinators are insects, birds, and mammals that move pollen between male and female parts of flowering plants, allowing plants to produce seeds. This process is known as pollination, and is a win-win for plants and pollinators. Plants get help with reproduction, and pollinators receive important nutrients from pollen and nectar, including sugars, carbohydrates, fats, vitamins, and minerals.

Nearly 88% of flowering plants and 35% of crops need pollinators to reproduce. In the Northwest, over 30 crops, including fruits and vegetables like apples, blueberries, cherries, alfalfa, tomatoes, and pumpkins need insect or bird pollination. Pollinators also pollinate wild plants and contribute to ecosystem biodiversity. In some cases, pollinators develop special relationships with plants, contributing to their survival. Wildlife also relies on pollinators, both as a food source and for their role in producing edible fruits and seeds.

Wild and managed pollinator species are on the decline throughout the United States, with serious implications for agriculture and biodiversity. Some pollinator numbers have already declined in the Northwest, largely due to habitat loss, invasive species, the use of pesticides, and climate change.

Environmental cues like temperature and precipitation levels tell pollinators when to lay eggs, emerge from or enter diapause, or begin pollinating plants. As those factors begin to shift, pollinator emergence may not always match the blooming of plants. Already increasing temperatures have caused flowers to bloom earlier by an average of half a day per year. In the Northwest, the blooming of plants is occurring more than 8 days earlier than in 1951. As such, bees and other pollinators may get out of sync with the plants they pollinate, which can affect pollinator survival and plant reproduction. Northwest specialty crops, including apples and other tree fruits, are already experiencing changes due to these missed cues. Higher spring temperatures have led to earlier flowering and less pollination, which has affected fruit quality and yield.

Extreme heat events, which are likely to become more common with climate change, can impact pollinators. Increasing temperatures have caused some pollinators to move to higher altitudes or latitudes with cooler temperatures. For example, increasing temperatures and extreme heat events have caused hummingbirds (like the Rufous hummingbird) to abandon historical habitats in favor of cooler temperatures. Extreme heat is dangerous for hummingbirds because they have fast metabolisms and must eat constantly. If they have to seek shade from intense heat, they can die of starvation quickly. Bumble bees are also feeling the heat. Unusually hot days have increased local extinction rates, reduced colonies, and decreased species diversity. 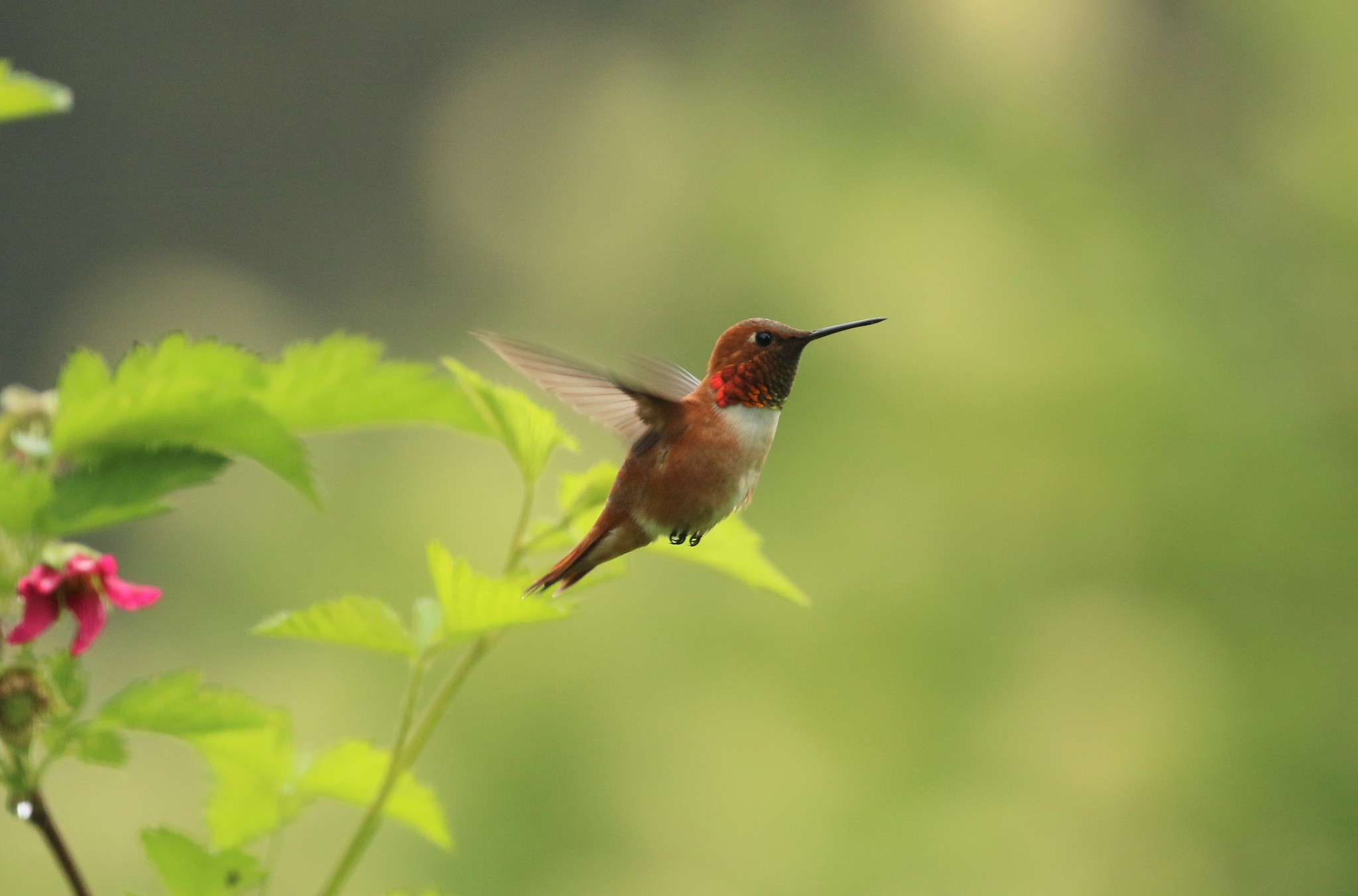 Other climate-related factors are also affecting pollinators in the Northwest. Wildfires can destroy pollinator nests and impact their ability to navigate. In addition, drought can reduce flower size, the number of flowers per plant, and the amount of pollen per flower. In combination, these climate-related factors are a significant part of the cause in a steady, 40-year decline in butterflies across the western U.S, as well as decreases in other pollinators. Overall, climate change could impact the ability of pollinators to continue pollinating plants that are important both to agriculture and ecosystem health.

Pesticides and herbicides can also harm pollinators and the plants that pollinators depend on for survival. Management actions like no-till farming and cover cropping, or the planting of hedgerows and insectary strips, can help farmers reduce pests and diseases with limited application of pesticides or herbicides. No-till can also provide habitat for ground nesting native bees.

What can we do to help Northwest pollinators?

Common pollinators of the Northwest

Bees are some of the most effective pollinators because their fuzzy legs and bodies collect pollen so efficiently. Honeybees alone pollinate 80% of all flowering plants in the United States. Honeybees, bumblebees, mason bees, sweat bees, cuckoo bees, leafcutter bees, and mining bees all pollinate Northwest plants. Blue Orchard mason bees (who pollinate many orchards), European honeybees, and bumblebees are some of the most common species of Northwestern bees. In Alaska, bumblebees are particularly important for pollinating berries.

Butterflies and moths are also important pollinators, though their long, thin legs and proboscises pollinate less efficiently than bees. The Monarch butterfly, Oregon swallowtail, and the island marble butterfly are some of the Northwest’s best known, though there are hundreds of beautiful butterflies in the region. Moths are largely nocturnal pollinators. Some, like the white line sphynx moth, are mistaken for hummingbirds for their ability to hover over flowers to drink nectar. The Northwest hosts over 1,200 species of moths.

Wasps are minor pollinators of flowering plants because of their smooth bodies. However, they control plant pests like aphids and cabbage looper, and keep insect populations in balance. Common wasps in the Northwest are yellowjackets and white-faced hornets, but there are also many tiny parasitic species that lay their eggs in aphids and caterpillars.

Flies can also act as effective pollinators of flowering plants. The syrphid fly, also known as the flower fly, pollinates plants, and its larva preys on aphids. Flies that pollinate flowers often mimic bees in appearance and behavior.

Beetles were some of the earliest pollinators of flowering plants in evolutionary history. Beetles prefer cup-like, fragrant flowers with tough petals, or plants that have clusters of small flowers, like asters and goldenrod. Some common beetle pollinators in the Northwest include the pin-tail beetle, checker beetle, and long-horn beetle.

Hummingbirds are another important Northwest pollinator. These tiny birds use their long beaks and tongues to drink nectar from bright, tube-shaped flowers. Rufous, Anna’s and broad-tailed hummingbirds are some of the most common species found in the Northwest.

Pacific Northwest Bumble Bee Atlas – This atlas provides an opportunity for citizen scientists to collect and share data about bees in Idaho, Oregon, and Washington.

Alaska Bee Atlas – This atlas is a collection program from the University of Alaska Anchorage to attain data on the biodiversity of bees in Alaska.

Pollinator Conservation Resources: Pacific Northwest – A region-specific collection of publications, native seed vendors, and other resources to aid in planning, establishing, restoring, and maintaining pollinator habitat—as well as materials to learn about the species of invertebrates and native plants in the Northwest.

USDA Programs and Resources to Support Beekeepers – A factsheet on available programs and resources for beekeepers.

Resources for Building Bee Pollinator Habitat in Managed Forests – A wealth of native bees exist in non-agricultural landscapes such as forests and landscape trees. Foresters that own or manage small, private woodlands all the way up to large, industrial woodlands can contribute to conserving and promoting habitat and resources for our native bees.

Plants for Pollinators in the Intermountain West – An NRCS guide to pollinator-friendly plants for eastern Washington, eastern Oregon, Idaho, Utah, and northern Nevada.