Another Warm Winter but Better News about Climate Change 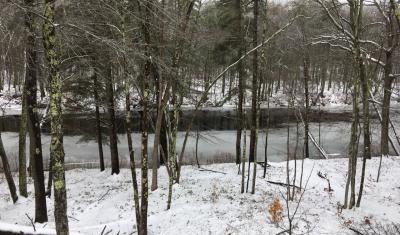 By David Hollinger, Director, USDA Northeast Climate Hub
Image Caption: Rivers and lakes remain unfrozen in much of the Northeast this winter.

NOAA’s Northeast Regional Climate Center has reported in their monthly blog that January temperatures in the Northeast averaged 3 to 9 °F above normal. December was also above average, especially in West Virginia. And except for a few places in the far north, snowfall is also down.

The Washington Post analyzed temperature trends using NOAA data last summer (see their article from the August 13th edition), and concluded that the Northeast was warming faster than any region in the continental US. While Alaska was the fastest-warming state in the nation, two Northeast states – Rhode Island and New Jersey – experienced some of the fastest warming in the Lower 48. NOAA’s climate data and graphing tools are available for use here.

So what’s going on and what does this mean for farming or forestry?

A new research publication titled “Record-Setting Ocean Warmth Continued in 2019” makes the cause of our regional trends clear; the coastal waters off the Northeast are warming faster than almost anywhere else. According to the publication, oceans currently absorb 90 percent of the heat trapped by greenhouse gases in the atmosphere. Ocean heat content – a measure of the heat stored in the upper levels of the ocean – has risen by 450 percent since record keeping began in the 1950s. The rapidly warming ocean waters off the Northeast seaboard are greatly affecting daily and seasonal temperature cycles on land. Indeed, the majority of the warming that we’ve seen in the Northeast has been at night and in the winter. That makes sense, as rising levels of greenhouse gases work by keeping heat from escaping the planet at night, and nights are longest in winter.

Warmer winter temperatures can lead to problems; less winter die-back of pests, shorter periods of frozen ground suitable for logging or other operations, and increased runoff and erosion from precipitation that falls as rain rather than snow. On the plus side, less heating is required for high tunnels or homes. The National Climate Assessment shows how we are locked into a certain amount of warming, but that what happens in the decades ahead depends hugely on our future actions. In a recent comment piece in the journal Nature, two climate scientists point out that the most alarming greenhouse gas emissions scenario for the future (the RCP 8.5 scenario) is looking less and less likely. The RCP 8.5 scenario was originally developed “to explore an unlikely high-risk future” the authors say, and actions around the world are helping move us away from this extreme.