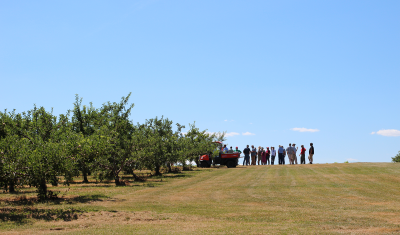 A two hour session at the 2018 Maine Agricultural Trades Show entitled, Farming in a New Weather Reality, hosted five experienced farmers to tell one story each of how a shift in weather patterns or extremes had affected their farm. We asked them to address how they responded and what changes they made as a result. We also asked where they went for assistance, and what information or resources would help them respond to similar situations in the future. Their stories were followed by a guided discussion that included inviting farmers in the audience to tell additional stories and agricultural service providers to describe currently available resources. The farmers represented a range of sectors: turf, sheep and fiber, honeybees, apples, and vegetables. Four of the five are full-time farmers, and all combined, they have over 165 years of farming experience.

Mentioned in particular were wetter and cooler springs, more frequent and intense rainfall and drought events, and a longer growing season. Specific impacts they described, as related to wetter conditions and intense rains, included the inability to transport and spread manure, seed and soil loss from runoff, and slower nitrogen mineralization. They shared that dry conditions hastened forage maturity but slowed pasture regrowth, increased rodent numbers, and delayed reproduction of insect pests. This, in turn, changed monitoring and spray schedules.

The farmers responded to impacts from both wet and dry conditions in a variety of ways. Field level changes included establishing a permanent raised bed system to deal with wet soils, and dividing fields into smaller parcels and adding berms to protect against erosion. Crop and species changes included adding fast growing turf grass species to protect against erosion, or adding drought-resistant pasture grass species. Other changes included dropping vegetable crops that under-perform on heavy soils during cool, wet springs, and capitalizing on the longer growing season by planting watermelons.

These include purchase of a 4-wheel drive turf harvester to drive on wet fields and the installation of an irrigation system for dry conditions. For all of the farmers, reliable weather and pest forecasts have become even more important for their operations. Beyond production issues, human health concerns, such as tractor safety on wet slopes and the increased incidence of Lyme disease, were raised. In fact, one audience member shared that contracting Lyme disease was a major reason they decided to stop farming.

As event organizers, we noted was that it was difficult for the farmers to tell one linear story because of the interconnectedness of their farming systems. It was difficult to focus on just one change or to isolate just one effect. For many, a change they made to respond to a weather issue had unforeseen consequences on other aspects of their operation, sometimes positive and sometimes negative. Additionally, site and system-specific conditions made each farmer’s experience and adaptation strategies unique. The farmers emphasized that access to resources such as cost-sharing through USDA-NRCS and crop insurance are important as they adapt, and that these resources need to be administered in a timely manner to be effective. Overall, the panel demonstrated that, while uncertainties exist about what to expect in the future from climate change, farmers are already making investments and altering production practices. These changes are to make their farms more resilient to the changes in weather patterns they are facing today.

To read more about the Farming in a New Weather Reality session, check out the featured article in the Kennebec Journal »