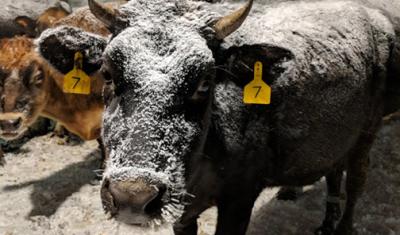 A recent study conducted by the Cornell Institute for Climate Smart Solutions and Pennsylvania State University, in collaboration with Cooperative Extension, used data from six farmer focus groups in New York and Pennsylvania.

Climate change impacts on agriculture have been increasing in the Northeast. Soil erosion, wet fields, and flooding due to increasing heavy downpours are just some of the many climate impacts that farmers face.

“We’ve experienced a lot of different things. You know, from drought, to in like 2011, we had 400 acres of corn underwater because of extreme moisture, and the river came out at the banks” – Pennsylvania Field Crops Farmer

A recent study conducted by the Cornell Institute for Climate Smart Solutions and Pennsylvania State University, in collaboration with Cooperative Extension, used data from six farmer focus groups in New York and Pennsylvania to examine:

“Well the changes we’ve made have not been because of climate change as per se, but for economic reasons…” – New York Vegetable Farmer

Still other farmers were more open to the possibility that recent climate change is human-caused. Though not overly concerned, they nonetheless indicated that their on-farm management decisions should be informed by sound understanding of the causes of climate change.

“My personal feeling is that our climate is changing. I’m less alarmist than many, but understanding more why and how may help us make better decisions for the future.” – Pennsylvania Tree Fruit Farmer

In summary, the farmers who participated in this study recognized and discussed their increased vulnerability under a changing climate. However, their non-climate concerns appeared to limit their willingness to consider climate adaptation practices and mitigation actions. They were more likely to take action if they perceived it would financially benefit them. Farmers are willing to adapt, but adaptation practices need to make economic sense first and foremost. These findings also help understand farmers’ priorities and needs, which can help guide efforts to develop and coordinate broad strategies to address climate change impacts on agriculture within the region.