The century old, family-owned farm operates under the management and resourcefulness of Nelson Cecarelli and William Della Camara. Together, the duo grow produce and strawberries with integrity; they use sustainable deep zone tilling methods and integrated pest management (IPM) techniques to increase farm resiliency, maintain soil health, and reduce their need for pesticides.

The RainWise MKIII weather station was installed January 6th and was immediately incorporated into the RainwiseWeather Underground networks. The Station is also part of the Network for Environment and Weather Applications (NEWA).  NEWA is operated by and funded through the New York State IPM Program and partners with the Northeast Regional Climate Center to deliver weather data and pest forecasts from over 300 sites in the Northeast. Weather data, leaf wetness, and solar radiation recorded at these weather stations are used to estimate pest and disease risks and spray times. These stations can also help with irrigation scheduling and send alerts by email or text for frost or other weather events.

Back in 2006, fields on the farm were pelted by a series of heavy rainstorms, which eroded and washed away much of its freshly turned topsoil. Fields were scattered with gullies, some up to four feet deep.

“We could have just purchased and imported an entire new layer of topsoil and written off the loss as one of those unavoidable disasters of running a farm. But from the day my grandfather first purchased that initial plot of Cecarelli Farms, our family has devoted itself to not just farming the land, but to improving the land in the process.” 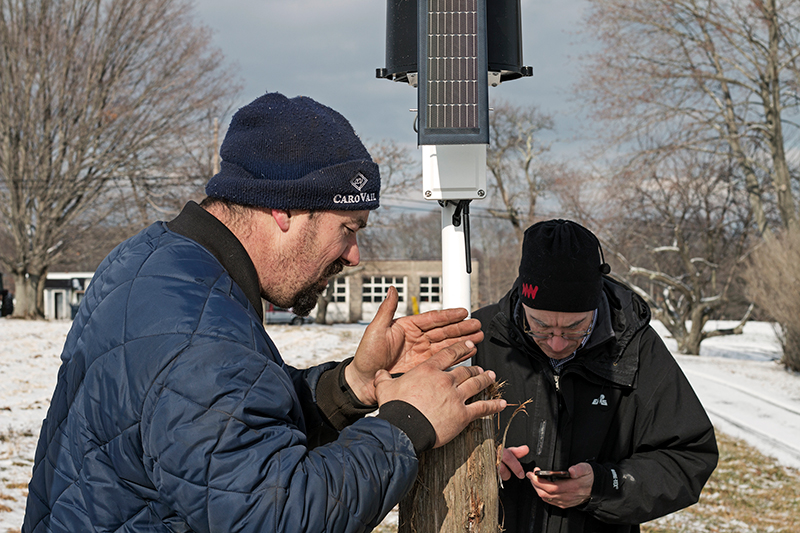 Instead, Nelson looked for a long-term solution. He had a hunch that there was something his farm could do to avoid repeated devastation from future downpours. After speaking with fellow farmers, community members, and equipment specialists, Nelson found Jude Boucher, an Extension Educator at the University of Connecticut. With Jude’s help, Cecarelli Farms was able to acquire a DZT machine. This deep zone tillage machine tills a very narrow strip of land that is just wide enough for crops, but penetrates deeply to aid in greater root structure depth and rain absorption.

“The results were astounding! Crops simply thrived, and the soil quality improved as they did. I was so taken with the effects of that single change that I started asking questions — lots of questions.”

Fast forward to 2016, and Nelson continues to ask questions in order to improve his farm. In his application to host a weather station, he noted that it would be an invaluable tool for making informed decisions regarding irrigation and pesticide applications. In partnership with Cecarelli Farms, the USDA Northeast Climate Hub looks forward to sharing updates and stories on how the farm decides to apply the weather station’s data in the coming seasons.

In the meantime, see how things look from the RainWise MKIII weather station at Cecarelli Farms.