A Renewed Focus on Soil Carbon 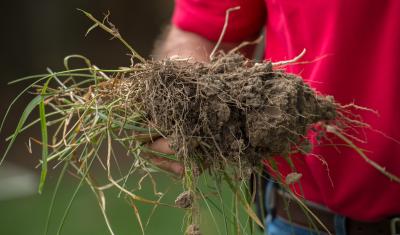 Adding carbon in soils depends on their management.

Stopping tillage, adding more plant biomass inputs (especially roots), adding organic amendments (such as manures, composts, or biochar), or a combination of these practices are all ways to manage for greater carbon storage in soils. In particular, conversion from row crop production to perennial vegetation is one of the best ways to increase carbon in soil. Planting warm-season grasses for bioenergy is one approach. This eliminates tillage and puts much more root carbon deeper into the soil. Converting low yielding row crop fields to pasture is another approach for the Northeast. Adopting no-till for row crops also usually adds carbon, but the increases are typically limited to the top few inches of soils. Annual crops often have small and shallow root systems that do not add a large amount organic matter to the soil, and only part of carbon from above ground crop residues is added to the soil organic matter when it is left on the surface.

Interest in commercial carbon markets that pay landowners for sequestering carbon to offset emissions is growing.

An important decision for administrators of carbon markets is whether to pay directly for a measured amount of carbon sequestered or provide landowners with a set payment for implementing a specific practice. A problem with measurement of changes in soil carbon is that the amount of carbon can vary greatly over short distances in uneven landscapes like we have in the Northeast. This means that a large number of samples must be taken to get a true average carbon content for a field and show changes from year to year. The amount the carbon that can be added in year with changes in management is also usually small compared to the total amount of soil, so it can take 5 or more years to add enough carbon to verify that there is a clear increase. To avoid the problems with direct measurements, estimates of carbon sequestration rates can be based on predictions from models calibrated with data from long-term studies. Using estimated sequestration rates for specific practices eliminates the sampling costs. However, differences in climate or soil properties can mean that the actual amount of carbon added to a field can differ somewhat from the model estimate.

Each soil has a carbon saturation point.

Increases in soil carbon after changes in management typically continue for two or three decades. At a certain point though, soil carbon levels will remain steady. However, carbon that has been sequestered remains out of the atmosphere and continues to help maintain healthy soils. Sequestering carbon as soil organic matter can help to off-set a portion of our greenhouse gas emissions. Maybe even more importantly, rebuilding and maintaining soil organic matter promotes healthier plant/soil systems that can better withstand an increasing frequency of extreme weather.