Agrivoltaics: Coming Soon to a Farm Near You?

In 2020, U.S. renewable energy production (and consumption) hit a record high. The increase was mainly driven by more solar and wind.

Despite this, renewable energy still only accounts for 12% of total U.S. energy consumption. Meeting the goal of “a net-zero emissions economy by 2050”, will require much more. According to a recent U.S. Department of Energy report, Solar Futures Study, “it is now possible to envision—and chart a path toward—a future where solar provides 40% of the nation’s electricity by 2035.” In that future, farmers and farmland will play a key role. One issue with renewable power is that it requires far more land per unit of power produced than fossil fuels. While many may favor renewable energy in the U.S. – that sentiment often changes when projects are proposed close to home. An energy system built on renewables – like solar or wind – would mean locating sites and infrastructure a lot closer to where those resources are either abundant and/or easily distributed. And, in many cases, this would mean areas that have not yet seen energy production or infrastructure in their own community backyards before.

How much land is needed?

According to the Solar Futures Study, a lot of land will be needed. By 2050, ground-based solar could need about 0.5% of the land in the contiguous U.S. To put this into perspective, about 5% of land is already in urban areas and roads and another 0.1% in golf courses. Agriculture occupies about 43% of the lower forty-eight states surface area.  The report points to prioritizing disturbed lands (8% of land) and dual-use land opportunities. Examples of disturbed lands include invasive species-impacted lands, non-vegetated lands such as quarries or gravel pits, and lands identified as contaminated but remediated for some forms of reuse. Agriculture will be an important dual-use case. 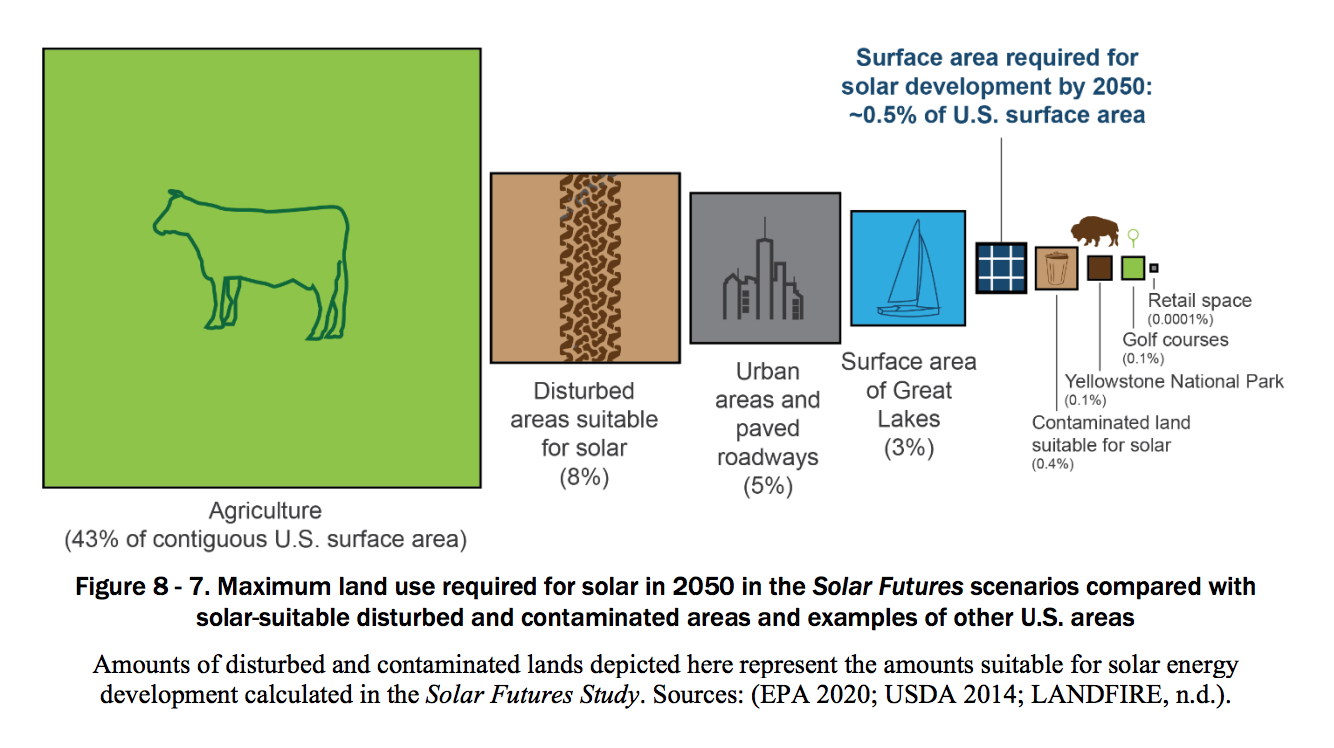 The idea is called: Agrivoltaics

Agrivoltaics is the use of land for both agriculture and solar photovoltaic energy generation. It’s also sometimes referred to as agrisolar, dual use solar, low impact solar. Solar grazing is a variation where livestock graze in and around solar panels. This system looks at agriculture and solar energy production as compliments to the other instead of as competitors. By allowing working lands to stay working, agrivoltaic systems could help farms diversify income. Other benefits include energy resilience, and a reduced carbon footprint.

A symbiotic ‘cooling’ relationship occurs when growing crops (or native grasses and forbs) under solar panels. Together, each helps keep the other cool. While all crops need sunlight to grow, too much can cause some to get stressed, especially cool season plants such as brassicas. Plants growing under the diffused shade of photovoltaic panels are buffered from the day’s most intense rays. Shade reduces air temperature and the amount of water evaporating from soils; a win-win for both plants and farm workers on hot summer days. The plants in turn give off water vapor that helps to naturally cool the photovoltaic panels from below, which can increase panel efficiency.

Agrivoltaics in the Northeast

The largest agrivoltaics site in the U.S. is on a blueberry farm in Rockport, Maine. This new 10-acre, 4.2-megawatt project is the first of its kind in the state, and will offer critical insights and experience. Researchers from University of Maine Cooperative Extension are evaluating the impact of panel installation on the blueberry plants.  They will also see how the crop fares over time under the solar array.

Another form of agrivoltaics seen across the Northeast integrates livestock and pastures. This concept is commonly referred to as ‘solar grazing.’ It has taken off in recent years as a win-win-win for farmers, solar companies, and the environment. Traditionally, the grasses that would grow up between solar panels need to be mowed to prevent the plants from shading the panels and reducing their efficiency. However, when sheep can be used, the high maintenance costs associated with mowing are eliminated for the solar company. At the same time, local shepherds can benefit from an added revenue stream to graze their sheep at these sites. Removing mowing operations not only keeps grassy areas safer for wildlife (i.e., nesting ground birds), but means less fuels and emissions too.

Check out some of these news stories on solar grazing from around the Northeast:

Researchers and farmers around the country are currently experimenting and collecting data on what crops, pollinator plants, and/or livestock situations work best with photovoltaic setups. Agrivoltaic systems can offer farmers many exciting opportunities. How agricultural systems perform, and how project economics shake out is still to be determined. Also to be seen is how states and communities will decide to address policy regulations and/or zoning laws based on this dual land use option.

The U.S. Department of Energy is supporting solar development and agriculture with their InSPIRE program. This program is managed by the National Renewable Energy Laboratory (NREL). It seeks to improve the mutual benefits of solar, agriculture, and native landscapes. Currently, there are 22 projects sites across the U.S. These bring together a wide array of researchers, farmers, and industry partners.

While a lot of research is underway, many questions about agrivoltaic systems persist. Various research and demonstration sites around the country are working to find answers to questions like: What are the long-term impacts of solar energy infrastructure on soil quality? What crops, in what regions, are best suited for photovoltaic systems? How can both crop and energy systems be optimized? How will livestock (and wildlife) interact with solar energy equipment? What types of business agreements will work best between a solar developer or company and agricultural producer or landowner?

Funds are available for renewable energy

Looking for more information on agrivoltaics?