Parts of the Northeast are now experiencing “Extreme Drought” (D3) conditions according to the Drought Monitor published September 17th. This is a first for the region this year and triggers additional financial support for producers in affected counties. D3 is present in parts or all of Aroostook and Penobscot counties in Maine, Bristol and Plymouth counties in Massachusetts, New London and Windham counties in Connecticut, and all of Rhode Island. Meanwhile the area under “Severe Drought” (D2) expanded in eastern New Hampshire and southern Maine while new parts of central Pennsylvania and New York entered “Moderate Drought” D1 conditions. As of this week, USDA Secretary Purdue has issued a drought declaration for Aroostook and contiguous counties in Maine.

The Farm Service Agency (FSA) Livestock Forage Disaster Program (LFP) provides payments to eligible livestock owners and contract growers who have covered livestock and who are also producers of grazed forage crop acreage that have suffered a loss of grazed forage. D3 (extreme drought) intensity in any area of the county at any time during the normal grazing period means an eligible owner may receive assistance in an amount equal to three monthly payments where a monthly payment is based on 60 percent of the monthly feed cost. Please see the link above or contact your local FSA office.

A related FSA program Emergency Assistance for Livestock, Honey Bees, and Farm-raised Fish (ELAP) is similarly triggered by D3 but does not pay for livestock feed. ELAP pays for the additional cost of transporting water to livestock in any area of the county that has been rated by the U.S. Drought Monitor as having a D3 (extreme drought) intensity that directly impacts water availability at any time during the normal grazing period. Assistance is also available to honeybee producers for additional feed loss in counties rated as D3 on the drought monitor.

The D2 designations across the region also allow the haying or grazing of land in Conservation Reserve Program (CRP) contracts. Contact the FSA for more details.

Other losses associated with drought in the region may be eligible through additional FSA programs such as the Tree Assistance Program (TAP), the Noninsured Crop Disaster Assistance Program (NAP), or Emergency Farm Loans. These programs are triggered by percentage losses and/or Secretarial Disaster Declaration.

Little or no rain fell across much of the Northeast over the last week, intensifying drought conditions. However, parts of New Jersey, Delaware, and other localized area received over 2”, several times average weekly rainfall for this time of year. The image below from the National Weather Service Advanced Hydrologic Prediction Service shows rainfall as a percent of normal for the last week. 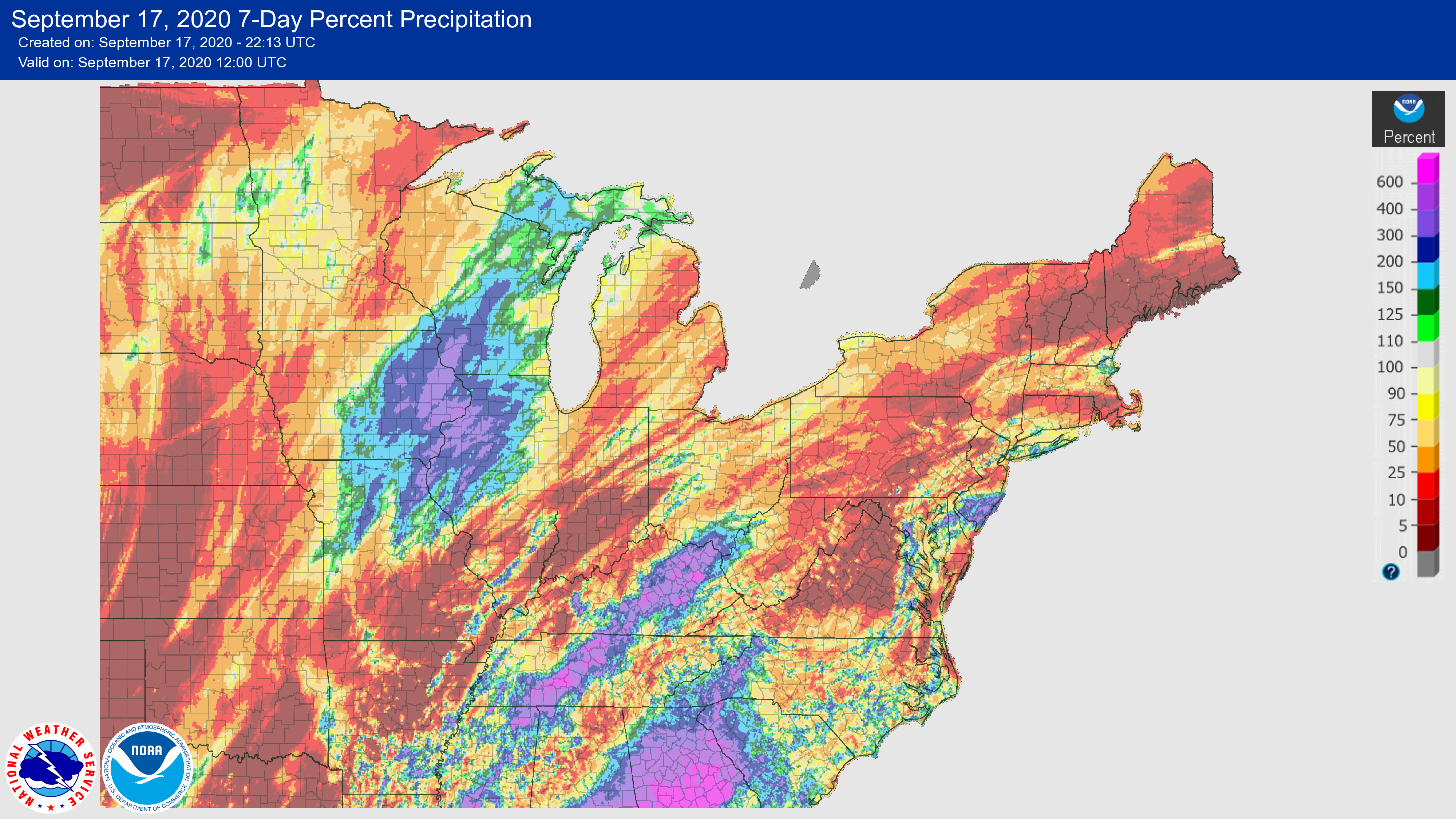 Soil moisture levels in the far north and coastal areas remain drier than normal with mostly adequate levels further south. As of September 15th, the USDA reports dry soils (topsoil moisture short or very short) across more than 90% of Maine, New Hampshire, and Rhode Island. In New York, moisture is short or very short in 37% of soils (down from 45%) and in Pennsylvania in 50% of soils (up from 38%). In New Jersey, Delaware, Maryland, and West Virginia, soils are wetter than average for this time of year. Pasture conditions are poor-very poor across much of New England. This includes about 75% of pastures in New Hampshire and 90% or more of pastures in Connecticut, Massachusetts, and Rhode Island.

The long-range outlooks do not show much relief ahead. The NOAA Climate Prediction Center (CPC) 6-10 day outlook (issued on September 17th and valid from September 23-27) suggests below-normal rainfall across the region while the longer range 8-14 day outlook suggests normal rainfall. The 6-10 day outlook favors normal temperatures across the region, with temperatures projected to be slightly above normal in the 8-14 day outlook. The tropics remain active this year, and NOAA forecasts issued in early August still anticipate an “extremely active” hurricane season in the Atlantic basin. In past years, remnant tropical systems have played the role of drought buster in the Northeast, and an active hurricane season coupled with abnormally warm waters off the eastern seaboard could support such a scenario once again this fall. Time will tell.

Cornell’s Climate Smart Farming Water Deficit Calculator provides water deficit predictions for any locality in the Northeast region. The tool enables producers to track changes in soil water deficits from the onset of the growing season through the present, and it also provides a three-day outlook based on current weather forecasts. Using this information, farmers can determine the amount of water that would need to be added to overcome soil water deficits according to the types of soils in their region and the types of crops that they are growing.