Crop and livestock production lead to the unintentional release of greenhouse gases (GHGs). Farmers can do something about that.

The top two green-house gases in agriculture in the United States are nitrous oxide (N2O) and methane (CH4). Nitrous oxide emissions come mostly from excess fertilizer nitrogen (agricultural soil management). Methane has two main sources, livestock (enteric fermentation), and stored manures (manure management). Producers can decrease both gases with relatively simple actions. Such “climate smart” practices can become marketing opportunities. Reducing these gases mostly involves increasing efficiencies (nitrogen fertilizer and feed efficiencies). This means that reducing GHGs can save money too. Overall, the EPA finds that the N2O and methane released in agriculture are responsible for about 10% of total U.S. GHG emissions. Both N2O and methane are much more effective at trapping heat radiation than carbon dioxide (CO2). However, these gases exist in the atmosphere at far lower concentrations than CO2. The relative warming impact of gases can be found by converting them to “CO2 equivalents”. As seen below, nitrous oxide is responsible for about 55% of U.S. agricultural GHG impacts. Methane from enteric fermentation, manure management, and rice cultivation covers most of the rest. Because of its short lifetime in the atmosphere and high warming potential, methane is an attractive target for control. Actions taken now can have a rapid impact and limit warming.

Methane is released from manure when it is held in a liquid form and bacteria have consumed the dissolved oxygen. In larger operations methane digesters can be used to capture the methane and use it to produce electricity or heat. In smaller operations, manure pits can be covered allowing the methane to be captured and burned. Covering manure pits has several benefits including odor control and water exclusion as well as trapping methane. The flaring of methane produces CO2 with a much lower warming effect than methane itself. Cornell University has a number of resources including tools and factsheets about the benefits of manure cover and flare off systems. For additional details see “Planning for Quantitative Methane Capture & Destruction from Liquid Dairy Manure Storage”. 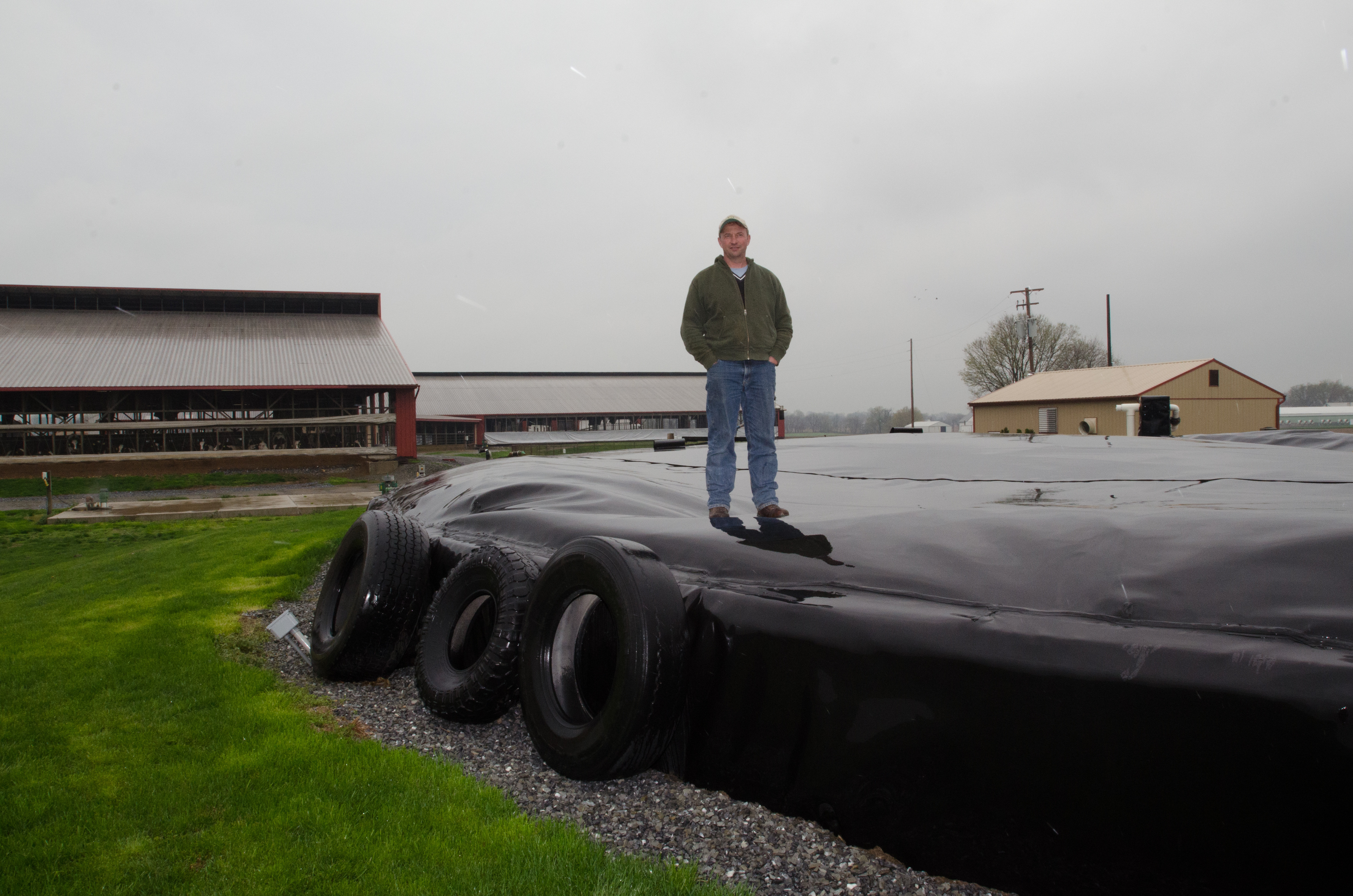 Almost 30% of all green-house gas warming in agriculture in the United States comes from the methane produced by enteric fermentation in cows, sheep, and goats. One of the most cost-effective and easiest ways to reduce greenhouse gases is to change the feed of these ruminants.  New studies are showing that tweaks in ruminant feed and livestock genetics can have big results in lowering the amount of methane released by animals.

In cows and other ruminants, bacteria, protozoa, and fungi make up a complex ecosystem or microbiome in the rumen, the animal’s first stomach.  This microbiome converts normally indigestible plant matter into proteins, lipids, and other substances including methane. As the animals chew and regurgitate, methane escapes in burps. The amount of methane produced depends on the make-up of the rumen biome and the feed that enters it.  There are two ways that feed or supplements can affect methane production. The first is by changing the relative populations of bacteria in the rumen, reducing the number of methane-forming bacteria, and increasing non-methane formers. A second way is to interfere with the chemical reactions inside the bacteria that produce methane. A new study by Claudia Arndt et al., “Strategies to mitigate enteric methane emissions by ruminants - a way to approach the 2.0°C target” is timely. It reviews the literature and discusses various feed management options and supplements including 3-NOP (3-nitrooxypropanol) and seaweed. 3-NOP is an organic compound which inhibits an enzyme that contributes to the production of methane. It has been approved for use as a feed supplement in Brazil as “Bovaer”.  Vegetable oils, 3-NOP, and other additives have been shown to reduce methane emissions while maintaining animal health and meat or milk quality. Dr. Alexander Hristov, Professor of Dairy Nutrition at Penn State University is a co-author of the study. He discusses a broader range of practical solutions in a webinar, “Effective Ways of Decreasing Enteric Methane Emission in Lactating Dairy Cows”, hosted by C-Lock Inc.

Other researchers have focused on the microbiome itself. The goal here is to discourage the methane producing bacteria. Dr. Rainer Roehe at Scotland’s Rural University is Professor of Animal Genetics and Microbiome. His research group looks at how the composition of the rumen microbiome influences feed efficiency and methane emissions. One finding is that genetic analysis of the microbiome can accurately (and cheaply) predict animal methane emissions. Other work shows how the animal’s genetic makeup affects the microbiome. There is emerging evidence that animal breeding can lead to a microbiome that produces less CH4. M. Martínez-Álvaro of Roehe’s team found microbiome-driven breeding for CH4 reduced emissions by 7 to 17% per generation. This suggests that in the future producers may be able to breed their herds for low-methane production. For more of Dr. Roehe’s work (including the stunning fact that cows may produce 150 liters of saliva per day), see “Rumen Microbiome - Selection Criteria to Reduce Methane Emissions”.

If you are a dairy or livestock farmer and you want assistance reducing greenhouse gas emissions and increasing feed efficiency, contact your local NRCS office. Funding is available to help producers implement practice 592, Feed Management. 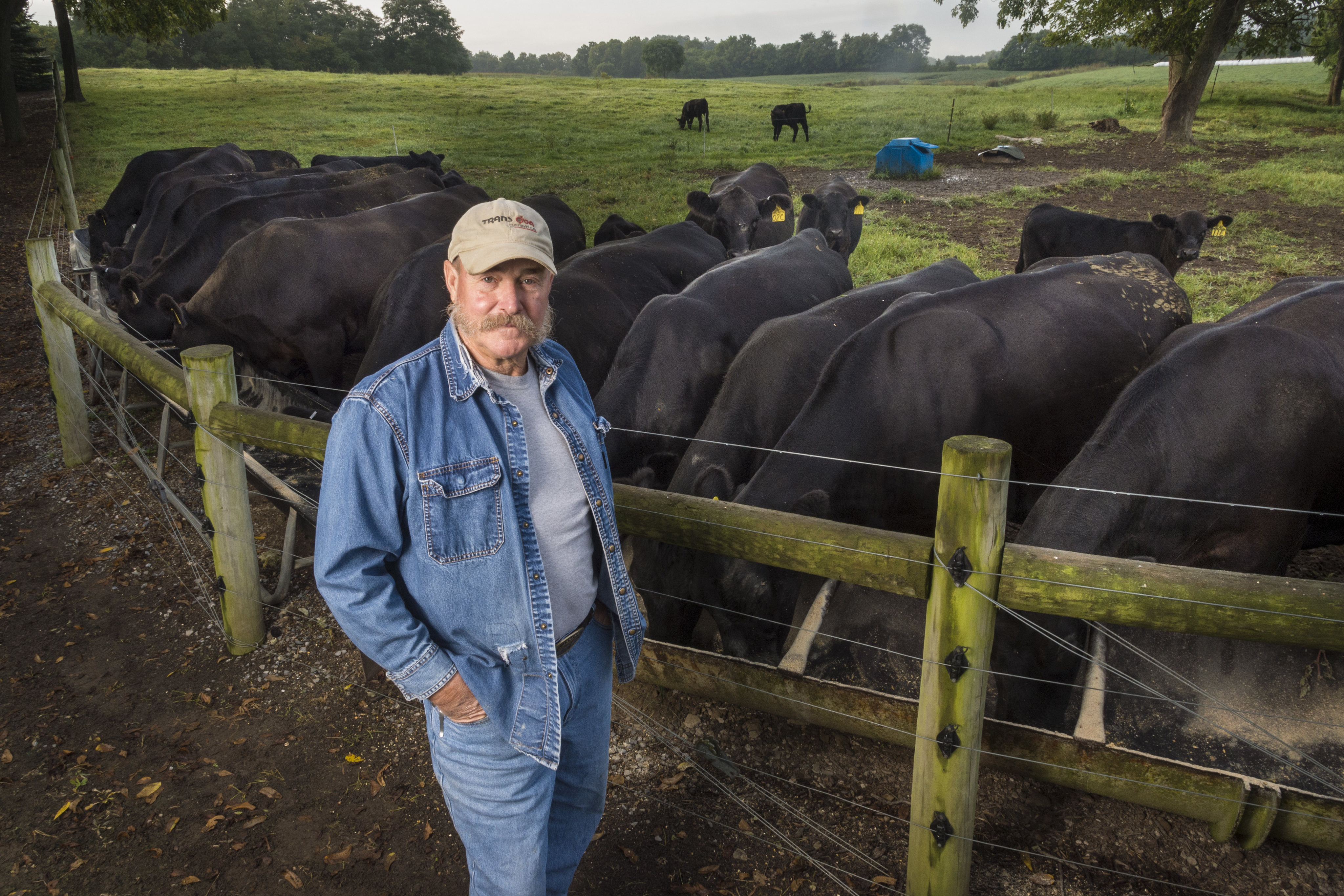 CAPTION: James Matheny (Army National Guard) and his wife operate Stonewall Angus LLC, in Fairplay, Md. where he markets his grass fed beef directly to the public from his 60-acre farm. | USDA Photo by Preston Keres