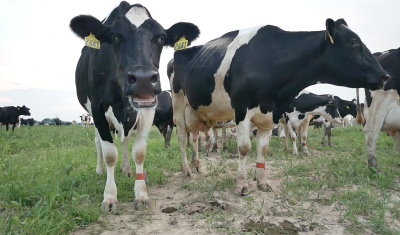 Keeping cows cool in the summertime is a major concern for dairy farmers, even in the relatively moderate climate of the Northeast. During humid heatwaves, temperature and humidity levels can rise above a cow’s comfort zone, leading to heat stress. When heat stress occurs, dairy cows will typically eat less food, have difficulties with calving, and produce less milk. Reduced milk production with heat stress is concerning given the dairy industry’s economic value to agriculture in the Northeast (Winsten et al., 2010). In the abnormally hot summer of 2005, for instance, dairy heat stress reduced milk production on some New York dairy farms by as much as 20% (Frumhoff et al., 2007).

Across the Northeast, temperature and humidity levels continue to rise with climate change (Grotjahn and Huynh, 2018), and these trends are expected to adversely affect dairy production in the near future (Frumhoff et al., 2007). Indeed, many northerly locales are already seeing heat stress occur with greater regularity (Polsky and von Keyserlingk, 2018). If the frequency and severity of humid heat waves increases as expected toward the end of this century (Russo et al., 2017; Coffel et al., 2018; Dahl et al., 2019), farmers in the Northeast may even need to adopt cooling strategies for their dairy herds.

Findings from the study suggested that dairy farmers could minimize milk production losses by adopting cooling strategies for their dairy herds. The team found that high, and in some cases, intense cooling strategies may become necessary to ease longer stretches of heat stress that are likely to occur later this century. Simple cost-benefit analyses also indicated that high and intense levels of cooling could potentially be economic for some dairy farmers to implement. In sum, while climate warming is expected to bring increasing challenges to dairy farmers in the Northeast, there is great potential to mitigate some of these challenges with various cooling measures.