In the dim, red glow of the immense warehouse, tall stacks of wooden boxes are lined up in seemingly endless rows. They will stand here in this dark chilly environment for the next couple of months until spring returns to California.

But this is not just a warehouse full of surplus beekeeping equipment, it is an indoor storage facility. And the boxes aren’t empty, but are filled with live, honey bee colonies. In this climate-controlled facility, these colonies are waiting out the winter weather. Storing bees indoors over the winter months is not new in North America. For many years, some beekeepers in Canada and the northern US have kept colonies inside over the winter to reduce their prolonged exposure to harsh conditions. Bee storage occurs in a wide variety of structures; from cellars and converted potato and onion sheds, to buildings designed specifically for honey bee storage - equipped with the latest climate control and air exchange systems. Over the last several years, indoor storage has been rapidly gaining popularity among US commercial beekeepers. An increasing number of colonies are spending time indoors. The timely use of indoor storage may offer some commercial beekeeping operations reduced winter losses, benefits to honey bee health, and greater financial security.

To avoid harsh winter conditions, US commercial beekeepers often move colonies to holding yards in California or other states where the weather is much milder.

However, colonies wintering in warmer environments remain active, rearing brood, and consuming greater resources. This results in costs incurred for the labor, travel, and supplies needed to feed and manage these colonies during this period. Holding yards can also have extremely high colony densities. Sometimes hundreds of colonies (or more) from multiple beekeeping operations are kept in close contact until they can be moved to pollinate almond orchards. This contact can result in enhanced bee drift (the accidental movement of honey bees from one colony to another), which increases the transmission risk of harmful pests and diseases among neighboring colonies. In comparison, indoor storage facilities that are sufficiently cool and dark keep bees within their hives.

It is possible to successfully overwinter strong, healthy colonies outside in cold climates, provided they have been adequately insulated and provisioned with food stores. But honey bees do not hibernate.

Under cold conditions, honey bees cluster tightly together inside the hive. They vibrate their bee bodies to generate heat, with the optimal internal cluster temperature reaching a toasty 35º C (~91ºF). If outdoor temperatures become warm enough during the winter months (above ~10ºC/50ºF), bees will break cluster and venture out of the hive to perform cleansing flights. This can reduce colony size over time since a portion of the bees who leave will not return. Those bees will also not be replaced until the queen begins laying again the following spring. This leaves fewer bees inside the hive to help regulate internal colony temperatures. Since bees consume greater resources when the weather warms, periodic temperature spikes can also increase the risk of starvation for colonies wintered outdoors if reserves are insufficient.

Our changing climate is resulting in increasingly unstable conditions for bees.

In the Northeastern US, shifting seasonality means more warm, late autumn days. The Northeast is also seeing more frequent winter temperature spikes, and disruptive winter freeze-thaw cycles. Colonies in the northern US and Canada are experiencing these shifts and seeing lower winter survival rates. While longer, warmer autumns may sound nice to some, this season extension is increasing the reproductive window for honey bee pests (i.e., Varroa destructor). In turn, beekeepers must increase their monitoring and may have to pay for more treatments to keep pest levels low. More temperature fluctuations and freeze-thaw cycles during the winter months means less reliable insulation from snow surrounding colonies wintering outdoors. Although beekeepers insulate their colonies in preparation for winter, snow can help reduce colony heat loss when air temperatures are low. 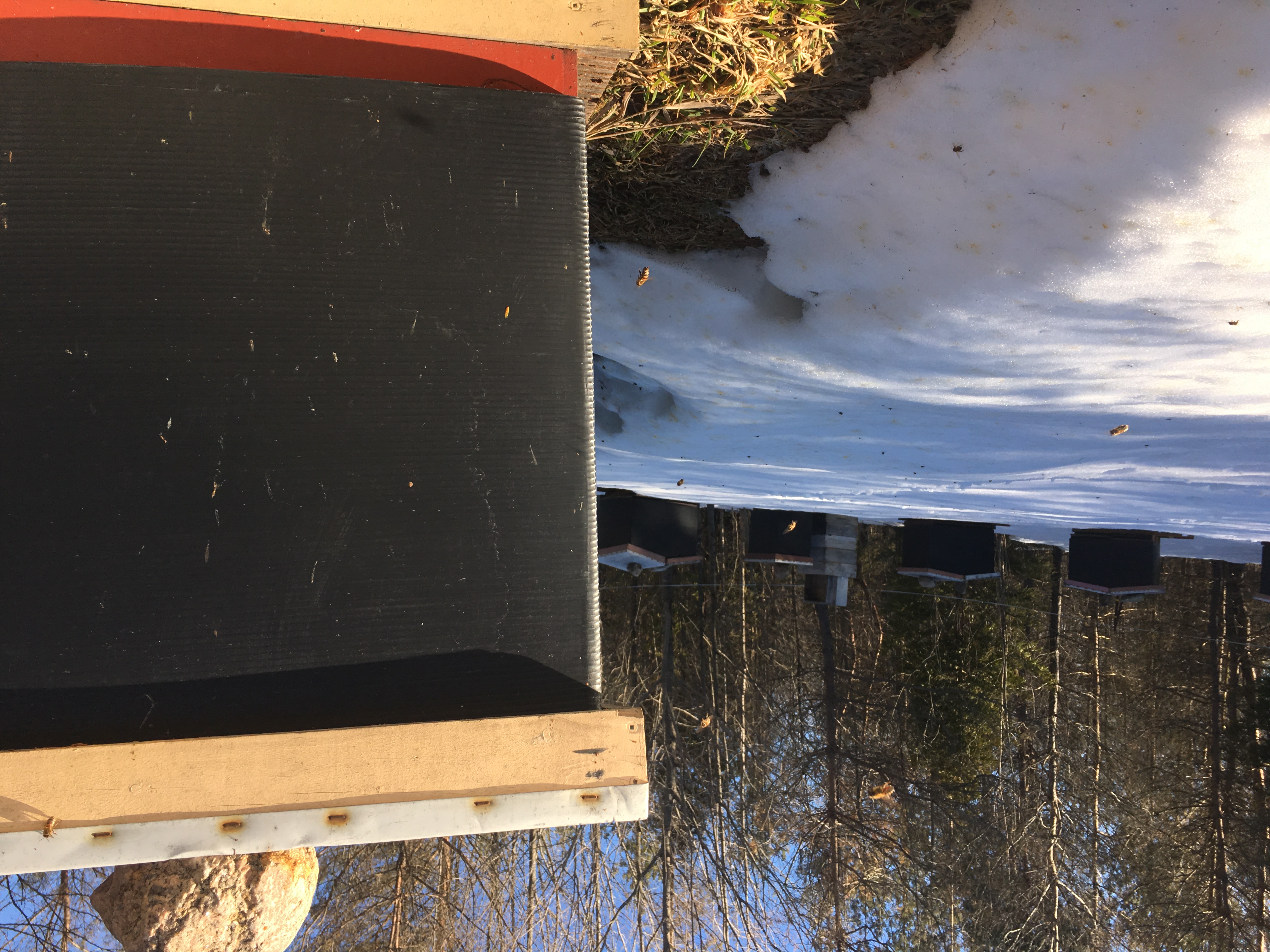 These challenges make the prospect of storing bees in facilities with controlled, consistent climate conditions more appealing. This is particularly true for the Northeastern US.

Colonies kept in the cool, dark environment of indoor storage facilities stop producing brood until returned to warmer, brighter conditions. This creates an opening for beekeepers to perform management actions that are best done under broodless conditions. One such management activity includes treating for Varroa destructor. This ectoparasitic mite feeds on developing and adult bees and transmits several harmful honey bee viruses. Varroa can only reproduce inside the capped cells containing developing honey bee brood. When colonies experience a broodless period or “brood break”, Varroa are also no longer able to reproduce. While brood breaks do not affect the adult Varroa population that already exists within colonies, the lack of capped brood cells makes some Varroa chemical control treatments more effective (compared to applications when brood is present). And because the colonies stored indoors are all in a single location, management actions (like Varroa treatment application) can be done quickly and efficiently as they enter or exit the storage facility. Some beekeepers are using indoor storage facilities to induce periodic brood breaks outside of wintertime as part of a comprehensive Varroa management plan. However, this approach may not be fitting for all operations.

While there are benefits to keeping colonies in cold storage, there are also costs that may make it impractical for some beekeepers. Financial costs that should not be overlooked include the costs of land and materials for either building a new structure or retrofitting an existing one. Add to that the energy required to run it. Some larger operations may rent out excess storage space. This could make storage a realistic option for smaller-scale beekeeping operations too. 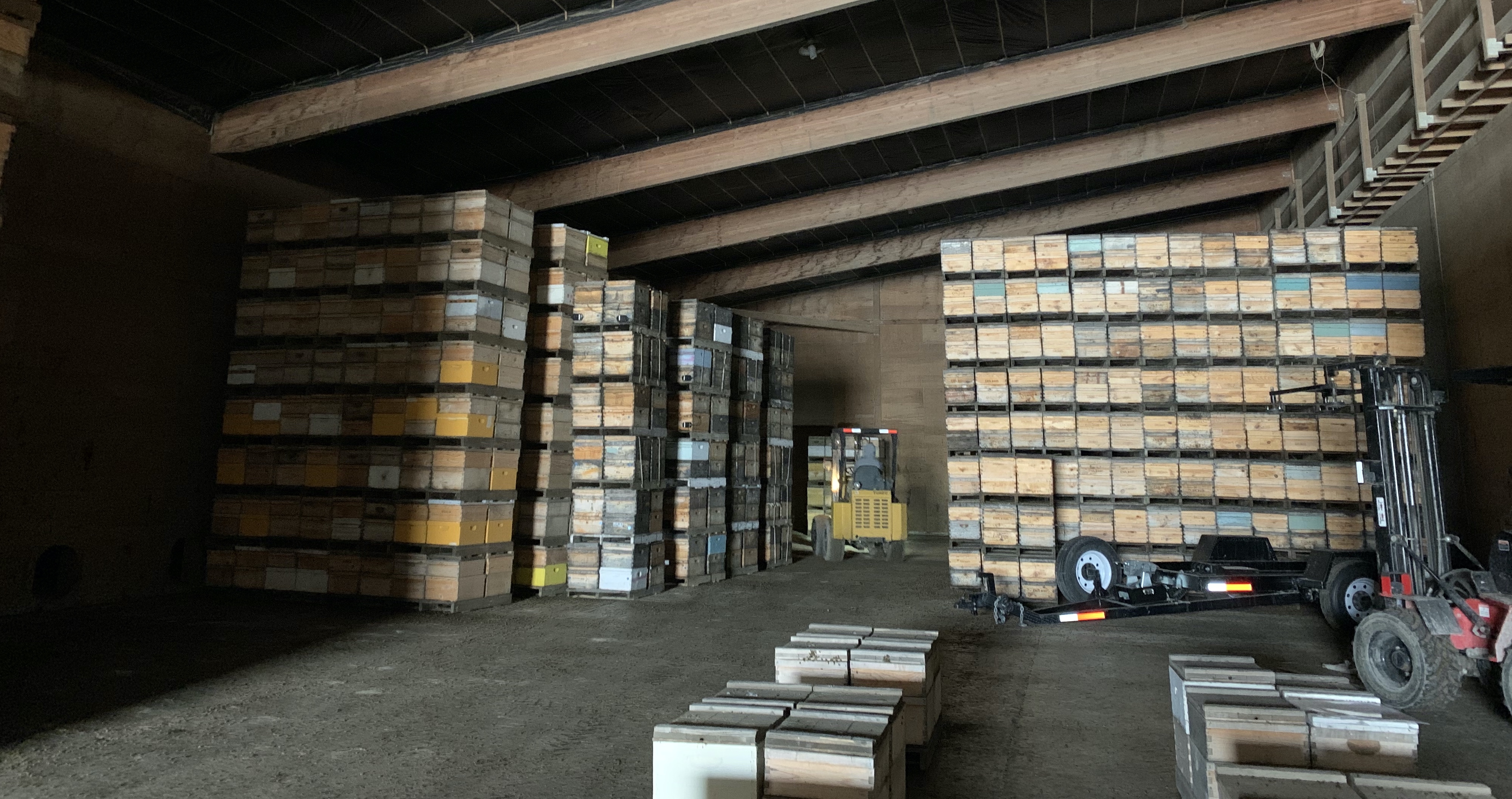 Colonies being maneuvered into place in preparation for indoor storage. | Photo by Kelly Kulhanek

Successfully storing colonies indoors for weeks to months at a time also requires a significant amount of planning.

Unlike colonies kept outdoors, bees that go into storage are intended to remain undisturbed for the duration of their stay. This means that all management actions, such as feeding, culling, or combining weak colonies and treating for Varroa and other diseases, must be completed before going into storage. By doing so, beekeepers are only paying to store strong, healthy, disease-free colonies. The condition of the colonies going into storage will dictate their condition when they are removed. As beekeepers like to say, indoor storage is “a hotel not a hospital.”

There are many potential benefits that indoor storage can offer to commercial beekeeping operations. These benefits have led to a rise in beekeeper storage interest. Looking ahead, more colonies may soon be wintering in storage sheds on site or catching a late-spring brood break in a facility further south. Either way, spending more time indoors is what’s in store for many US honey bee colonies.

This article was written by Jeri Lynn Parrent, Ph.D. Dr. Parrent is the Grant and Communications Coordinator for Bee Informed Partnership, a 501(c)(3) national non-profit organization dedicated to improving honey bee health. She is also a faculty research specialist in the honey bee lab at the University of Maryland, College Park, MD.