Testing the Novel Shallow Well at Hart Farm in Maine

Long, hot periods without rain during late summer continue to challenge vegetable growers in the Northeast. These dry spells may become more frequent due to climate change.

In this region, many vegetable growers have historically relied upon rainfall as the primary water supply for their crops. However, reliance on rain can mean crop damage or loss when the rain does not fall. Because of this, farmers are increasingly interested in diversifying their water access options to meet their total farm irrigation or livestock watering needs.

One emerging option for New England farmers is a shallow well, which is cheaper, safer, and even capable of storing more water than a traditional dug well. These wells can be used as either a supplemental or primary water source. However, since these wells are a new design, their use in agricultural systems is still being tested.

Putting it to the test

Hart Farm is a diversified farm in Holden, Maine that produces vegetables, flowers, and pasture-raised pork and beef. Farm owners, Becky and Andrew Toothacker, are currently experimenting with using a novel shallow well for irrigating their vegetable crops.

In 2021, the Toothackers installed the shallow well on their property to serve as their main source of irrigation water for their vegetable crops. Its relatively low cost was a primary driver in their decision making.

“It was cheaper than installing a traditional well so for us it was worth it, [because] our other option was a traditional well, so for us with limited resources it was worth it…as first-generation farmers, we don’t have the infrastructure that’s already there so a lot of it is our own sweat equity and whatever we can put on personal credit or what we can reinvest from our market earnings.”

While a traditional well can often cost over $40,000 dollars, the shallow well only cost around $5,000 dollars to install. In addition, the Toothackers do not anticipate maintenance costs other than servicing the pump every season.

The shallow well at Hart Farm is approximately twenty feet wide, twenty feet long, and sixteen feet deep, which is slightly smaller than the original design developed by Joe Ayotte in 2017. This is because Becky and Andrew could not dig as deep as they hoped after they hit a vein and water began to flow into the hole. The Toothackers say that if they were to install the well again, they would dig it wider to compensate for the lack of depth.

For the past two seasons, the shallow well has served as the primary source of irrigation water for a one-acre vegetable field. In 2022, an agricultural drought persisted in Holden from late June through the end of August, and the well recharge rate slowed. Because the shallow well was the primary water source, this left the Toothackers with less water than they needed. This reinforces the fact that, while novel shallow wells may provide enough water to meet farm needs at some sites, farms in other locations may need to  complement their shallow well with other water sources. 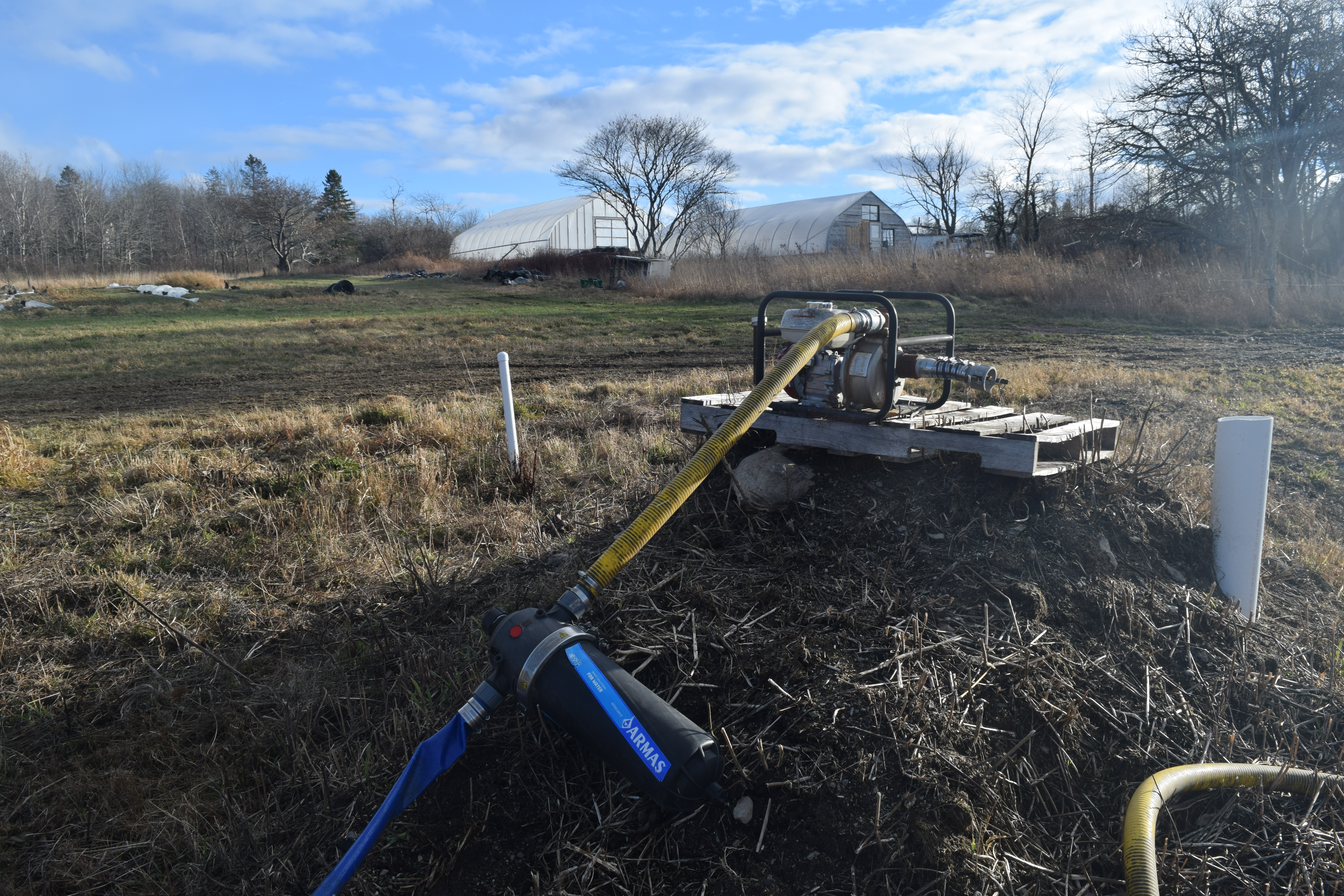 [Right] Caption: The well as it looks in December of 2022.  | Photo credit: Sara Kelemen

This type of well is designed for use in glacial till and consists of a deep rectangular hole which is back-filled with crushed stone and covered with a geotextile filter fabric. A pump placed in the well casing moves the collected groundwater to the surface through PVC piping. This scalable well is more sanitary than a traditional well and has a lower risk of arsenic contamination.

One of the major benefits of the design is its fast recharge rate compared to traditional dug wells. Where traditional dug wells are usually deep and narrow, this shallow well has far more volume. The on-the-ground footprint of the well pit, which functions as a miniature aquifer, can be 500 square feet or larger depending on a farm’s water needs. The large surface area of the sidewalls of the well allows more groundwater to flow into the well than in a traditional well. The increased recharge is thought to increase the tolerance of this type of well to drought conditions. As with all wells, however, there is a finite amount of water that can be drawn, especially during dry periods.

In the future, the Toothackers hope to diversify their water sources. They plan to pump water out of a spring-fed pond and use the shallow well as backup in case of drought or low water availability. “Water availability is a limiting factor in growth,” Becky says, noting that they plan to scale up production in the coming season. They plan to increase their production on parts of their property where they can access water from a spring fed pond while continuing to produce crops and raise livestock in fields near the shallow well.

Since this is a new type of well, many details about how much water it can provide in any given location, and how best to use the well are still being determined. The Toothackers hope that research will yield answers to some questions they still have about how to best use the shallow well to meet their farm’s goals. They wonder about the influence of soil type on recharge rate, and the size of well pit needed to irrigate different size fields. As one of two shallow well locations in Maine where agricultural well data is being collected, Hart Farm will play a key role in helping researchers answer questions about the new well’s applicability on farms.

The novel shallow represents an exciting option in farmers’ climate adaptation toolbox. As farmers in the Northeast prepare for dry periods in late summer, shallow wells can be an option to turn to for primary or supplemental water supply.

U.S. Geological Survey New England Water Science Center and the University of Maine are collaborating on evaluating the wells in a variety of settings. Farmers interested in digging a shallow well and sharing data should contact University of Maine Assistant Professor of Sustainable Agriculture, Dr. Rachel Schattman at rachel.schattman@maine.edu.