Climate Change and Wildfire in Idaho, Oregon, and Washington

How do climate and wildfire relate?

Idaho, Oregon, and Washington are comprised of forests, shrublands, and grasslands that have cultural, economic, ecological, and social value. Although wildfires occur naturally and contribute to the long-term health of these ecosystems, changing wildfire patterns may put people at risk and have some negative effects on ecosystems. Wildfires in the Northwest have been immense in recent years. Large and severe fires are associated with warm and dry conditions, which are likely to intensify with climate change.

Several climate-related factors contribute to these changes in wildfire patterns in the Northwest:

With higher temperatures causing soils and vegetation to dry, fires can start and spread more easily. Trends of longer wildfire seasons and larger wildfire size are predicted to continue as longer and more severe droughts occur.

Can we attribute recent wildfire events to climate change?

In Oregon, the 2020 wildfire season in moist forests on the west side of the Cascades caused extensive damage in some communities. Wildfires burned nearly as much forest in 2 weeks as had burned in the previous 50 years in the area. Several of these fires were also larger and more severe than fires documented in recent decades. Although the 2020 wildfire season registered as extreme in comparison to recent historical wildfire records in the region, paleo-ecological records show that fires of this size and magnitude (and some even larger) have occurred within the last several centuries. These fires shared similar weather conditions such as strong east winds and very dry conditions, occurring at the same time of year (August-September) and burning in some of the same locations.

More frequent and severe fires can slow the regrowth of vegetation and alter the species composition of Northwest forest ecosystems. High-severity fire creates opportunities for establishment of invasive species, such as cheatgrass, and can limit tree regeneration. In Northwest forests, a warming climate coupled with more frequent wildfires will lead to a shift away from shade-tolerant, thin-barked, or fire-intolerant species such as western hemlock, subalpine fir, and Engelmann spruce. Species that are fire-tolerant, thick-barked, and have high seed-dispersal rates, like Douglas-fir and ponderosa pine, are likely to fare well. However, with warmer and drier conditions and more frequent disturbance, there are some locations that will likely shift from forest to shrubland or grassland.

Short interval reburns (fires in areas burned within the last 15-20 years) are also likely to occur with increasing frequency. Frequent reburns can shift species composition toward species that are adapted to frequent fire. Some tree species will have a difficult time regenerating if intervals between fires are short, and shrubs and grasses may dominate for extended periods. 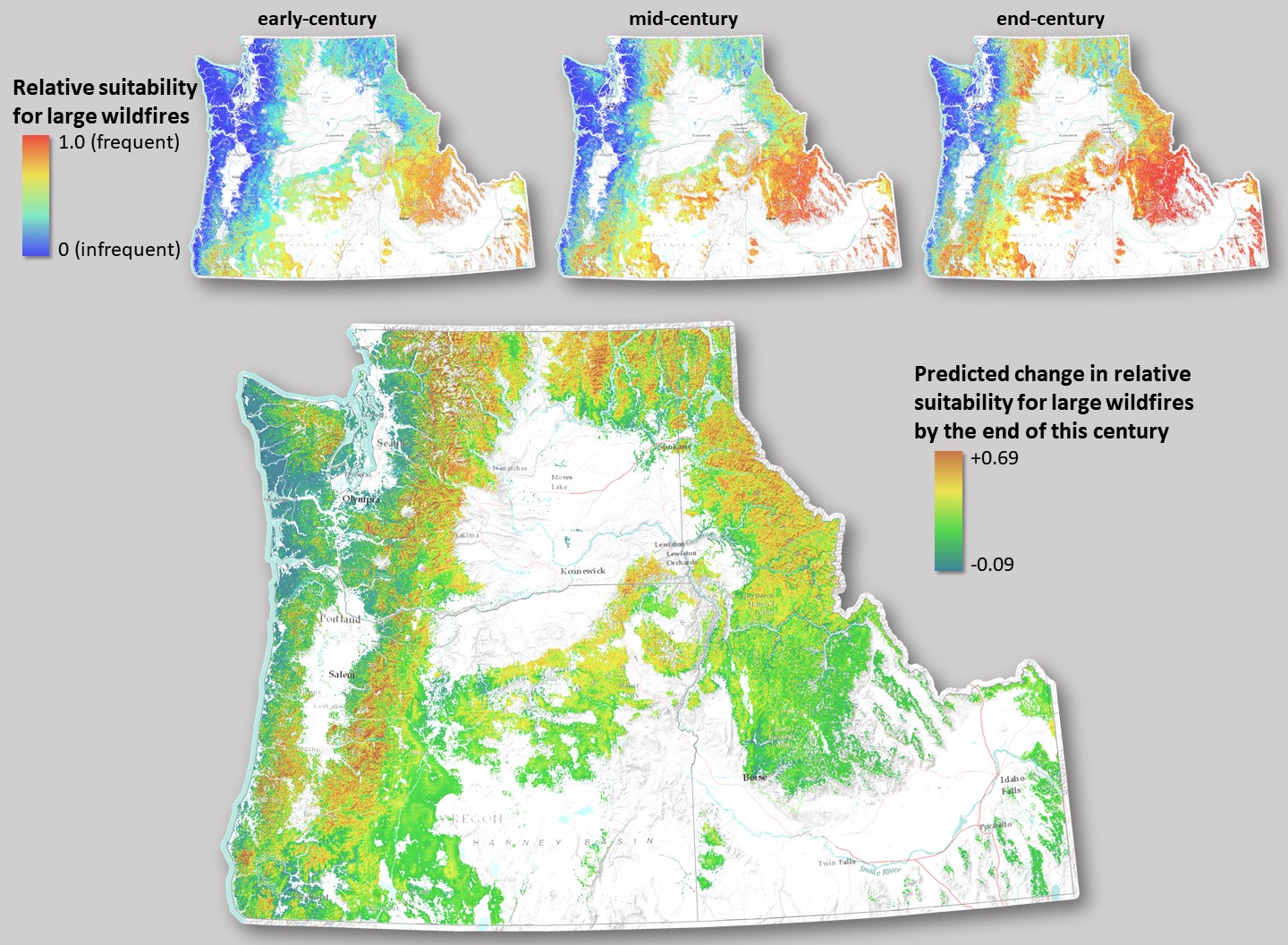 There are other factors related to climate change that influence wildfire frequency and severity. Land use, lightning, invasive species, and management practices such as fire suppression all influence fire patterns in the Northwest.

Discerning changes in wildfire patterns requires an understanding of many complex socio-environmental elements.

What can we do about wildfire and climate change?

There are several adaptation strategies that can increase forest resilience and decrease wildfire intensity. Forest thinning and prescribed fire can reduce fire intensity and severity and increase forest resilience to fire, insects, and drought. In wetter, high-elevation, and coastal forests, managers can implement fuel breaks around valued resources. When post-fire planting of vegetation is possible, managers can choose species that are tolerant of drought and resistant to wildfire.