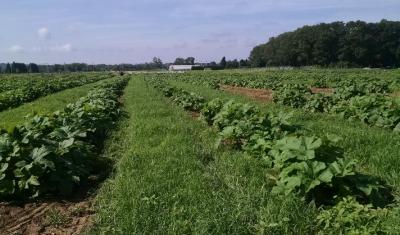 Summer cover crops traditionally have not been used in Rhode Island because of the short summer fallow period. However, a changing climate is creating new opportunities for summer cover crops. As the fall season becomes milder, fall cash crops are now being planted as late as the end of September. This creates an increasing gap period between the harvesting of early summer crops and the planting of fall crops. The fall cash crops are also being harvested later, which means that winter cover crops are planted later and are unable to produce as much biomass as in the past. 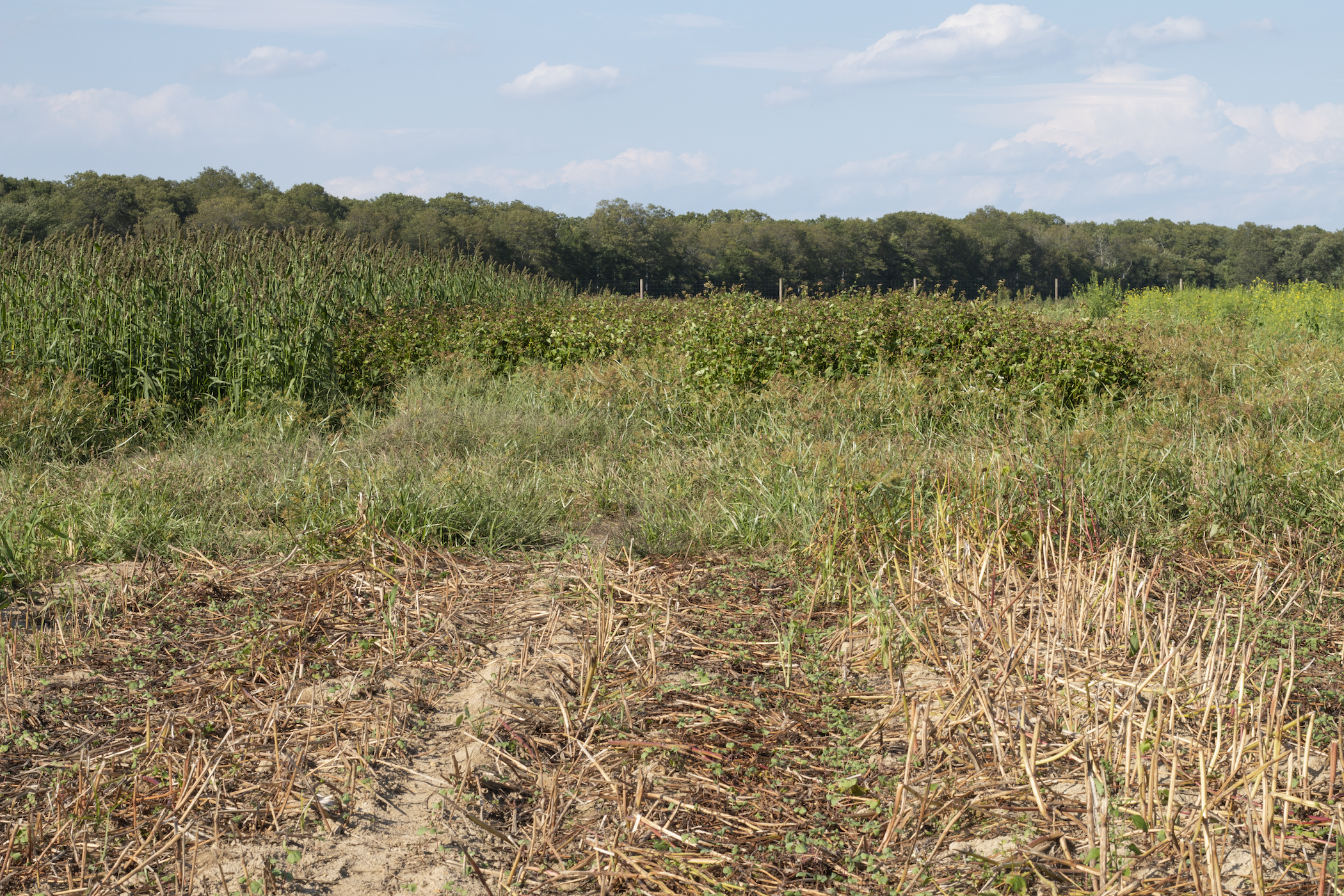 View of summer cover crop trials at URI in September 2016.

Conventional wisdom suggested that the cool-season legumes and winter grains used as winter cover crops in the northern United States would not grow during the summer. It was thought that warm-season grasses and tropical legumes would be better choices for short-window summer cover crops. However, summers in Rhode Island are cooler than summers in the Southeast and Midwest, where most research on summer cover crops has been conducted. The URI research found that Japanese millet (Echinochloa esculenta) and teff (Eragrostis tef) make good summer cover crops in Rhode Island’s climate. Both crops effectively build soil health and meet weed suppression standards. Sunn hemp (Crotalaria juncea) and chickling vetch (Lathyrus sativus) performed poorly as cover crops under the same conditions.

Japanese millet is a summer annual grass native to eastern Asia. In Rhode Island, Japanese millet is a promising summer cover crop for fields that are left fallow for at least 6 weeks during the summer. In highly fertile soils, it can produce more biomass than buckwheat (Fagopyrum esculentum) and can grow for up to 10 weeks without going to seed. Japanese millet is extremely tolerant of wet soils and is more tolerant of cold climates than sorghum, sudangrass, or corn. 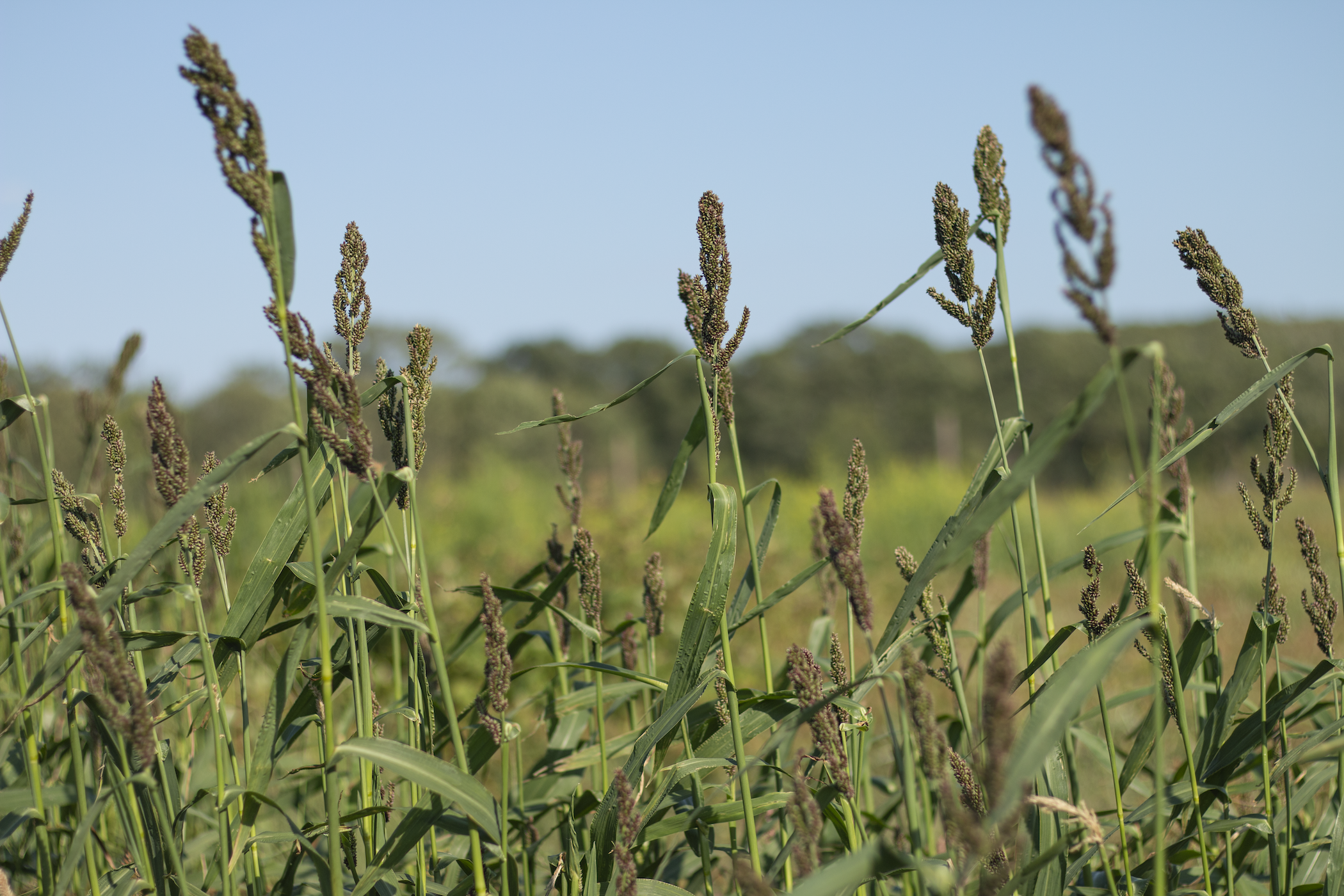 In 2019, Japanese millet seed could be purchased from seed suppliers for $0.84/pound. Based on field trials, the most effective seeding rate for a monoculture of Japanese millet is 44 pounds/acre. This rate maximizes both weed suppression and the amount of biomass produced for incorporation into the soil (figure 1). Japanese millet is very forgiving of seeding depth, and recommended planting depths range from ¼ inch deep in wetland soils to 1 inch deep in dry upland soils. Seed can be planted with a grain drill, no-till grass drill, or Brillion seeder, or it can be broadcast and incorporated by shallow cultivation. Once planted, Japanese millet is excellent at scavenging nitrogen. Plants also respond to high soil fertility and grow well after early summer manure, legume cover crops, or sod are incorporated. Seed germinates when the soil temperature at a 2-inch depth is 60 °F, but growth rate and weed suppression are best if seeding is delayed until soil temperatures reach 70 °F. In Rhode Island, Japanese millet seeded from mid-June to mid-July produced the most biomass. 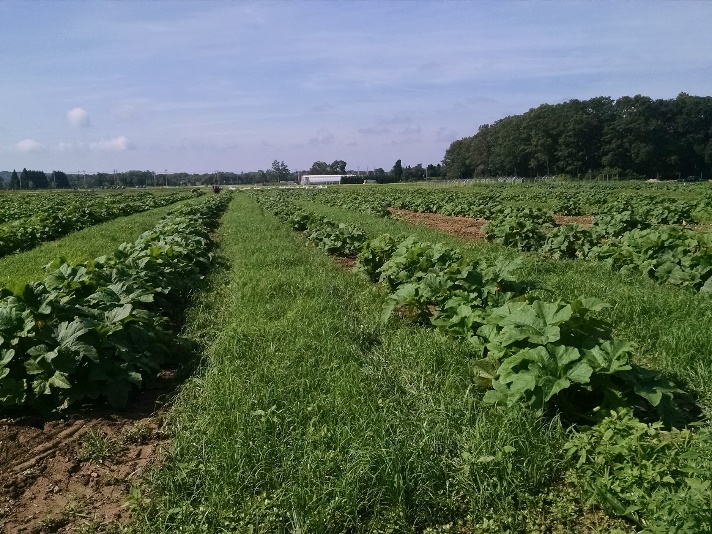 Teff is a summer annual grass native to the Ethiopian Highlands of East Africa. In Africa, it is grown both for forage and as a cereal grain. The optimal growth temperature for teff is lower than that for sorghum or sudangrass. This makes it a good cover crop choice for coastal New England, where summer temperatures rarely exceed 90 °F. Teff forms an extremely dense canopy that effectively outcompetes weeds, yet it is easily mowed. The plants can be incorporated into the soil using basic walk-behind equipment. Unlike sorghum or sudangrass, teff can be cut and dried as a premium quality hay that is suitable for horses.

In 2019, teff seed could be purchased from seed suppliers for $3.00/pound. Teff will establish a weed-suppressing canopy in as little as 3 weeks. A seeding rate of 7.5 pounds/acre results in more than 250 teff seedlings/ft2 , so it can outcompete weeds such as crabgrass, pigweed, and smartweed. If the goal is to maximize biomass production, teff should be permitted to grow for at least 10 weeks before the cover crop is terminated. In field trials, teff seeded on June 19 produced just over 1 ton/acre of dry biomass at 6 weeks after seeding. Yields increased to just over 2 tons at 8 weeks and to nearly 3 tons at 10 weeks. There were no differences in biomass yield, canopy height, or weed suppression when teff was seeded at rates ranging from 7 pounds/ acre to 18 pounds/acre of coated seed. When establishing teff in a field, seed should be planted no more than ¼ inch deep into a very firm seedbed that is free of clods and debris. If the seedbed is fluffy or uneven, many seeds get buried too deeply to successfully emerge. It is best to seed using a Brillion grass seeder and cultipacker combination, which can create the seedbed and place the seed in one operation. Shallow raking, rolling, or sprinkler irrigation can be used to ensure good seed-soil contact after broadcast seeding. Tillage should not be used to incorporate seed. Teff is not suited to no-till planting or frost seeding. If annual broadleaf weeds germinate along with the teff, mowing the whole area can prevent the weeds from setting seed. Teff tolerates many post-emergent broadleaf herbicides. This including halosulfuron, which is commonly used to control nutsedge.

Tillage can be used to terminate teff growth in fields where fall crops will be planted. The teff residue is easier to incorporate into the soil than cereal rye or sorghum, and no negative effects on the fall crops have been reported. Herbicides are not needed to prevent regrowth of teff after incorporation. Another option is to harvest the teff biomass as hay. The teff plants can also be reduced to mulch with a flail mower, and fall vegetables can then be transplanted into the teff stubble. Regrowth is minimal on teff mowed in September or later. Teff is not suited to termination by rolling and crimping, as the stems are flexible and will not be crushed by the roller.

If a field is not used for a fall vegetable crop, teff can be allowed to winter kill. Teff will produce mature seed if the first killing frost occurs later than mid-October. However, in 3 years of experiments at URI, there were no indications that teff seed survives the winter to become weedy. Having the plants in the field over winter prevents erosion and suppresses growth of chickweed and other winter annuals. The residue can easily be incorporated into the soil in the spring. Teff tolerates traffic and is highly tolerant of mowing down to 4-inch stubble. This makes teff an excellent choice for seeding in alleys, between raised beds, or between rows of pumpkins. Experiments at URI showed that seeding 5-foot swaths of teff between rows of long-vine pumpkins planted 10 feet apart did not affect pumpkin yields. The teff canopy suppressed weeds, which reduced pre-emergent herbicide use by 50 percent. In addition, the plant biomass residue helped to build organic matter in the soil.