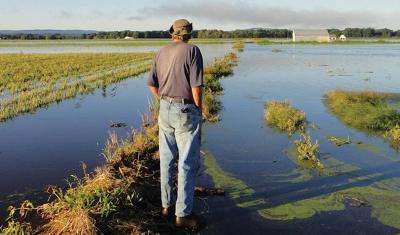 The Northeast Regional Vulnerability Assessment provides an overview of regional agriculture and forest sensitivities to climate change and suggests adaptation strategies that can help build resilience.

The Northeastern United States is a diverse region containing the seven most densely populated States in the Nation. Agriculture in the Northeast is varied, including vegetable production, ornamentals and fruits, animal production, and field crops. Forests are a dominant land use in the northern parts of the region and in the Appalachian Mountains.

Wet springs are delaying planting and harvest dates and reducing yields for grain and vegetables. Heavy rain in the Northeast has increased more than any other region in the country. Despite the trend toward warmer winters, increased risk of frost and freeze damage has been observed over the past decade. Perennial crops (e.g., grapes, apples, cherries) are particularly vulnerable to variable winter temperatures. Extended warm periods in late winter or early spring can cause premature leaf-out or bloom, followed by an extreme frost, costing growers millions of dollars. This scenario played out across parts of the Northeast in spring 2012, when a late frost contributed to a 38% decrease in apple yields in New York State. Though longer growing seasons provide opportunity for greater forest growth and agricultural yields, intensified weed and pest pressure (e.g., corn earworm, kudzu) may also result from extended seasons and warmer winters.

Higher temperatures in the Northeast are already having an effect on tree species distribution.

A study in Vermont found an upslope shift of several hundred feet in the boundary between northern hardwoods and boreal forest on the eastern slopes of the Green Mountains between 1964 and 2004. Ocean temperatures are also rising, changing the range of suitable habitat for many commercially important fish and shellfish species. Native American communities are observing a range shift in their traditional foods gathered from the forests, which may lead to negative health and cultural effects.