When it rains, it pours: How climate change fuels heavier rains

In 1914, the Morton Salt Company devised a creative advertising slogan for its table salt: “When It Rains, It Pours”. The popular slogan was meant to highlight the fact that their salt would pour easily, even in rainy weather. While climate change was far from their minds at the time the slogan was coined, the phrase “When It Rains, It Pours” has quickly become an apt metaphor for our current weather reality.

Without a doubt, today’s rainy weather is much different than the rainy weather of the early 1900s. Over the past century, rainstorms across the US have increased in frequency and severity. Some of the greatest changes in heavy rains have been focused over the Mid-Atlantic and Northeast regions, where the amount of rainfall occurring in the top 1% of daily events has increased by 55%. The upper Midwest has also emerged as another hotbed of rainfall extremes and flash flooding.

What explains the rapid rise in rainfall extremes?

As Kenneth Kunkel noted in a Nature News Feature by Alexandra Witze, “It’s just basic physics”. The amount of water the atmosphere can hold (and eventually release) increases by 7% for every one degree Celsius (1.8 degrees Fahrenheit) increase in air temperature. Given that the world has on average already warmed by about 1.2 degrees Celsius, it’s not surprising that we’ve seen extreme rainfall events unfold with greater regularity across the US. Indeed, climate scientists have foreseen these increases in heavy rainfalls as the hydrologic cycle has intensified. In the last decade alone, roughly one out of every four rainfall extremes has had a clear connection to climate change. 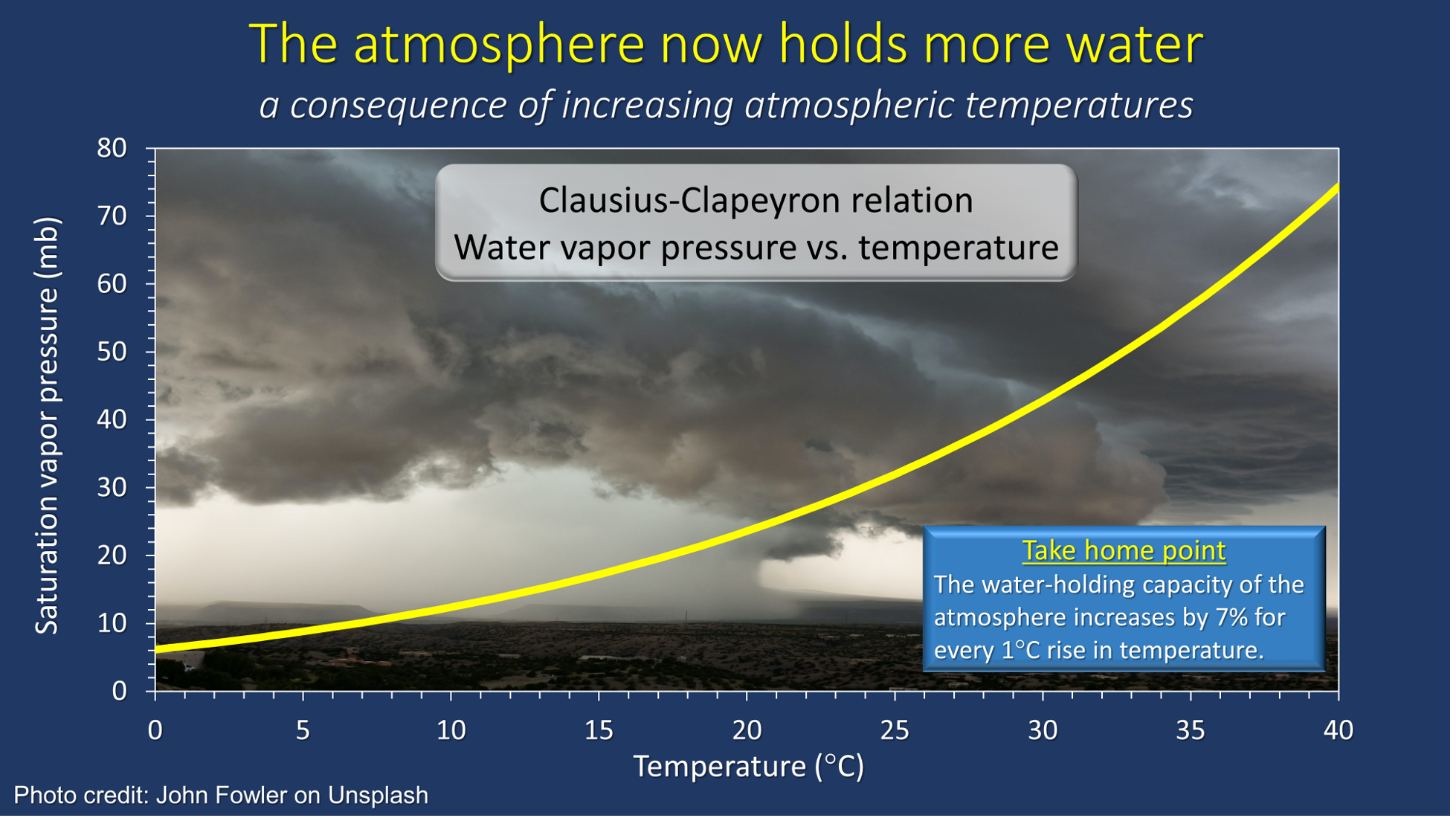 In line with recent summers, the summer of 2022 has already seen its fair share of extreme rains. For instance, during an eight-day period in late July and early August, three separate extreme rainfall events hit portions of Kentucky, Missouri, and Illinois in rapid succession. Roughly a week later, extreme rains near Charleston, West Virginia resulted in extensive flash flooding of streams and rivers. And most recently, extreme rains swamped portions of the Dallas metro area, which was previously suffering from severe drought.

What does the future hold for extreme rains in the US?

Recent research now suggests that extreme rainfall events will continue to increase in frequency and intensity across the nation, including in the Northeast. Large thunderstorm complexes, which are predicted to become more frequent and intense with climate change, are likely to play a key role in producing excessive amounts of rainfall. These storm complexes will certainly increase the risk of flash flooding, especially in urban areas. Low-lying regions with poor drainage will also be susceptible to enhanced runoff from these sorts of intense storms.

Preparing for a future with more extreme rainfall is an urgent task. Here in the Northeast, increasing our resilience to rainfall extremes will require cooperation between scientists, engineers, and planners to update rainfall statistics and modernize urban infrastructure. Such preparation is also needed to maintain the integrity of our agricultural and forested landscapes. By taking these advance measures, we won’t be caught off guard the next time it rains. Because in a warmer world, “When It Rains, It Pours”.