Forests influence atmospheric greenhouse gas levels in ways most people don’t think about. Scientists describe this as the carbon cycle.

If the atmosphere was a checking account, sometimes things happening in the forests act as credits to the checking account, sometimes they are debits. As trees grow, they absorb carbon dioxide from the air, converting the CO2 into plant matter by way of photosynthesis. In the case of trees, wood is produced and is about 50% carbon. Scientists call this process of carbon gain sequestration. It is, in effect, pulling carbon dioxide out of the air.

Forest fires are in the news a lot these days. In addition to the loss of lives, property, and effects on remaining forests, a fire causes lots of carbon dioxide to be released into the air. When this occurs, greenhouse gas levels increase (see Fig. 1). Trees that die due to insects, disease, fires or old age eventually decay too and release carbon into the soils and carbon dioxide into the air. It’s this give and take of carbon dioxide in forests that enables us to call it a cycle. 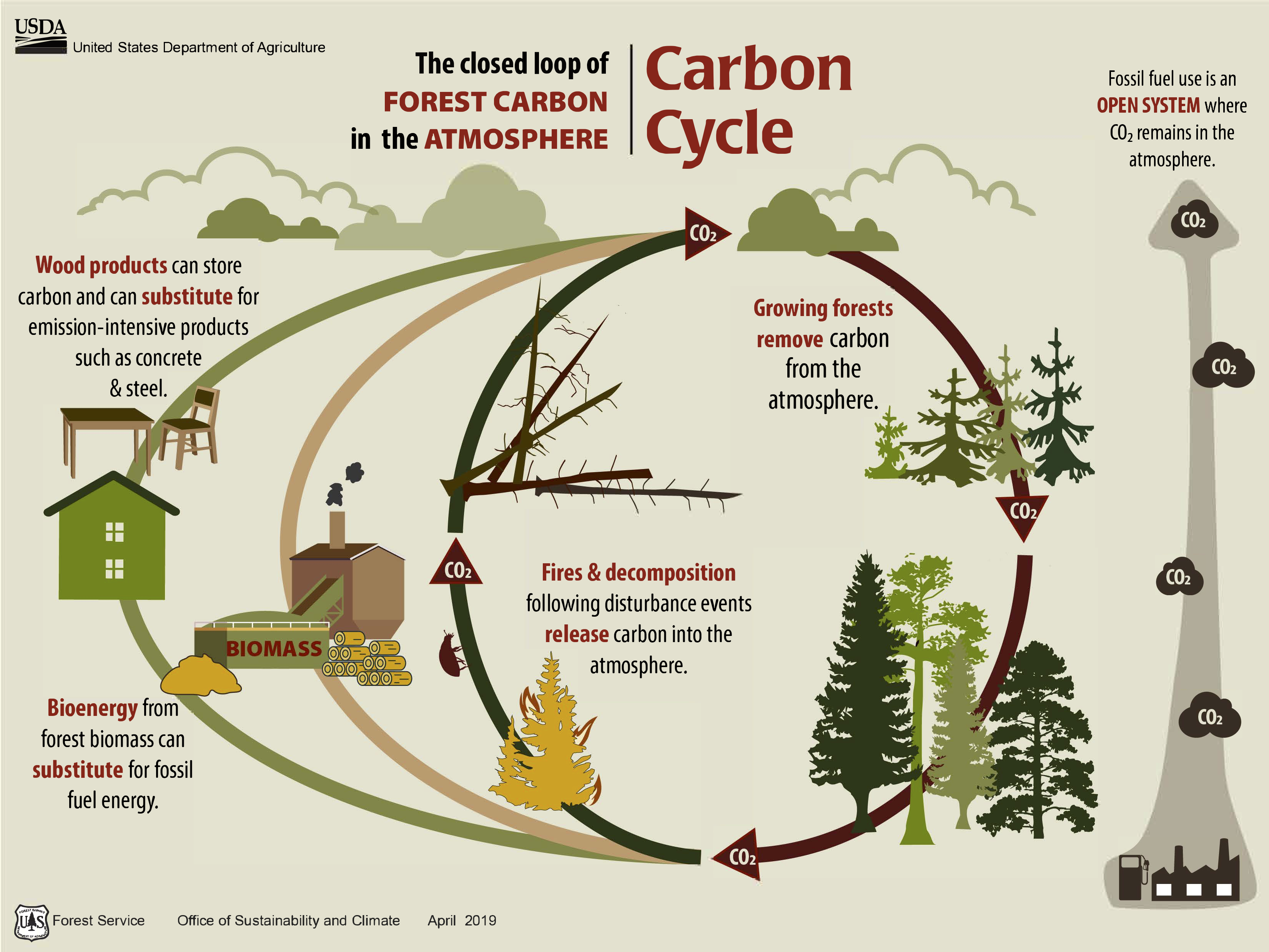 One of the responsibilities of the US Forest Service is to do periodic inventories of how many trees there are in the United States, their growth, and other factors about where they grow.

This branch of the Forest Service is called Forest Inventory and Analysis. The info they generate is useful in a lot of ways. In a greenhouse gas context, the data they produce is useful to, let’s call them carbon accountants, who track forest greenhouse gas debits and credits. The great thing about forests is that healthy forests sequester more carbon than they give off. Forests are in that way a kind of carbon sponge.

The use of forest products also plays a role in the carbon cycle.

Since trees are about 50% carbon, using them in long lived buildings “locks up” that carbon for a long time.  Using wood in construction is particularly advantageous if it is used in place of concrete and steel which are much more carbon intensive. Additionally, while the benefits of biomass energy are vigorously debated, in the long run the use of biomass energy in place of fossil fuels produces carbon benefits too.

The Environmental Protection Agency (EPA) keeps track of and report all greenhouse gas emissions, be it from industry, transportation, forests, agriculture, or other sources, in the United States. While most of these sectors produce greenhouse gases (acting as what scientists call sources), forests are referred to as carbon sinks. Our forests reduce overall U.S. greenhouse gases by about 14%, annually.