Delmarva and the Ground for Change: A Forthcoming Environmental Documentary Focused on Soil Health

Read on to learn about how it all came together and get the inside scoop on the farms involved. You’ll also catch a first look at the film’s newly released trailer too!

Why make a feature-length documentary film on soil health?

K: We all know that climate change is causing greater environmental and economic challenges for U.S. agriculture. However, we might not all know that soil health practices can help working farmlands become more resilient to these mounting climate extremes and can even contribute towards fighting climate change. A lot of farmers know this though, and I wanted to use film as a way to give them the time to share their knowledge and perspectives.

Why does this film take place on the Delmarva Peninsula?

K: According to the most recent USDA Census of Agriculture (2017), our Maryland and Delaware farmers are leaders in practices that protect and promote healthy soils. More specifically, the practices of cover cropping and no-till farming are huge in these two states. Farmers here are also under an immense amount of environmental pressure in being so close to the Chesapeake and Delaware bays. To put some numbers to it, 29% of Maryland and 19% of Delaware cropland acres were reported to be ‘under cover’ in 2017. In contrast, only 3.9% of cropland acres in the U.S were planted with cover crops that same year (a 50% increase from 2012). Additionally, the highest reported use of no-till on cropland acres in the country occurs in Maryland (58%) and Delaware (54%). With these numbers, how could the Climate Hub not take a closer look at farms in this part of our region?

How did you find or select the farms featured in the film?

K: It came down to ‘word of mouth’ for this film; that’s how I found all my farmers. At the start, Michel Cavigelli, USDA Northeast Climate Hub Co-Director with USDA’s Agricultural Research Service in Beltsville, MD, said if I was going to do anything on soil health in the Mid-Atlantic, I needed to talk with Trey Hill of Harborview Farms in Rock Hall, MD. From there, travel logistics were a large constraint in finding the next two farms given I was operating as a one-woman production crew. I also wanted to make sure that the three farms selected were 1.) different in operation (to show how varied farms can be), 2.) not all in the same state, and 3.) had women actively involved. Fortunately, recommendations from partners at the University of Maryland, University of Delaware, and Sussex Conservation District (big thank you to Nate Richards, Jennifer Volk, and Debbie Absher!) helped open the door to initial meetings with Matt and Ed Fry at Fair Hill Farms in Chestertown, MD, and Laura Hill at Deerfield Farm in Lewes, DE.

Were there any other special considerations you had in making this film?

K: Yes, working with large farming operations was important to this film for a few reasons. First, within the Northeast, farms tend to be small with high farmer-to-consumer direct sales (i.e. farmers markets, community supported agriculture programs). However, this picture of farming is not representative of American agriculture as a whole. Data from USDA’s Census of Agriculture tells us that many medium to large-scale farms are getting bigger, while many small farms are getting smaller. So, it was really important to work with farms that could represent agriculture beyond the Northeast. Second, we are seeing fewer and fewer active farmers – largely due to an aging generation of farmers with fewer young people going into (or staying in) farming. Because of this, the disconnect between our farmers and the American consumer continues to widen.

With this film, I saw an opportunity to address this gap, and show the faces behind some of our region’s larger farming operations. I felt that this topic was also important to document because portrayals of ‘big’ farms are often seen as inherently bad, and ‘small’ ones as inherently good. I think that many of our ‘big’ farms can do (and are already doing) a lot of good through their environmental stewardship in an expansive and efficient manner. And when it comes to creating a more resilient food system in the face of climate change for a growing population, we need everyone on the same team.

What can you tell us about the farms involved?

K: Overall, working with the farmers featured in this film was a rewarding and unique experience (I just hope they can say the same about me after having a camera follow them around for so long!). Each farm did have its own unique rhythms and combination of soil health practices.

Trey Hill of Harborview Farms, located in Rock Hall, MD, was the first daring farmer who agreed to this film project. His grain operation of corn, soybeans and wheat on over 10,000 acres is certainly sizable for the Northeast. And it might sound typical until you learn that 100% of the crops planted at Harborview use a practice called, ‘planting green.’ Trey explains this as quite literally meaning that crops are planted into a ‘green’ or living cover crop. To do so, the farm employs no-till farming. This intentional method of farming does take a lot of learning and management, and Harborview is also doing the research on how to grow a cover crop and commodity crop simultaneously. This style of farming improves soil health and protects soils from weather extremes, but, as Trey notes, “the result of the system is one that does help mitigate climate change by sequestering carbon into the soil.” How’s that for climate smart farming?

Busy doesn’t begin to describe Matt and Megan Fry of Fair Hill Farms in Chestertown, MD. These two transitioned their conventional dairy of about 600 milking cows to organic back in early 2016, and they also went through the construction of a new milking facility. At the time of filming, they farmed about 1,400 acres, which included 300 acres of permanent pasture and 60 acres of cool and warm season annuals. While economic reasons were the motivating factor for transitioning the herd, the environmental benefits are where the Fry’s have seen the largest gain. Not only has a pasture-based system increased the biodiversity of bird and insect populations on the farm, but it has also helped to reduce soil erosion. As Matt puts it, “[it’s] been a big change, especially in an organic system, where in row crop, we depend so heavily upon tillage, we don’t see those same type of sediment and topsoil losses.” The farm also utilizes cover cropping on its row crop acres as well; a practice that is big for Maryland farmers. As a dairy, their cover crops are also able to play double duty. Not only are the cover crops benefiting their soils, but they are also being harvested as feed for the dairy.

Laura and Roland Hill Jr. of Deerfield Farm have been running their poultry and grain operation located in Lewes, DE for about 40 years. Together with their sons, they employ no-till farming across all corn and soybean fields, and do their best at planting cover crops across as many fields as possible come harvest in fall. At the time of filming, they managed about 1,800 acres of farmland, with over half in continuous no-till for over 20 years. However, they have been losing a significant amount of rented ground too development. Deerfield Farm is actually quite unique in that not many other poultry operations also grow grain and vegetable crops. Having both types of operations allows them to utilize their poultry litter, which reduces their need for synthetic fertilizer. Deerfield Farm also stood out to me for their use of subsurface drip irrigation, a low pressure, high efficiency watering system by which drip tube lines are buried belowground. This type of irrigation system can better target water and nutrients to crop root zones, which helps to both conserve water and reduce weed populations. And in the words of Roland Hill Jr., it “fits good with the no-till program.” 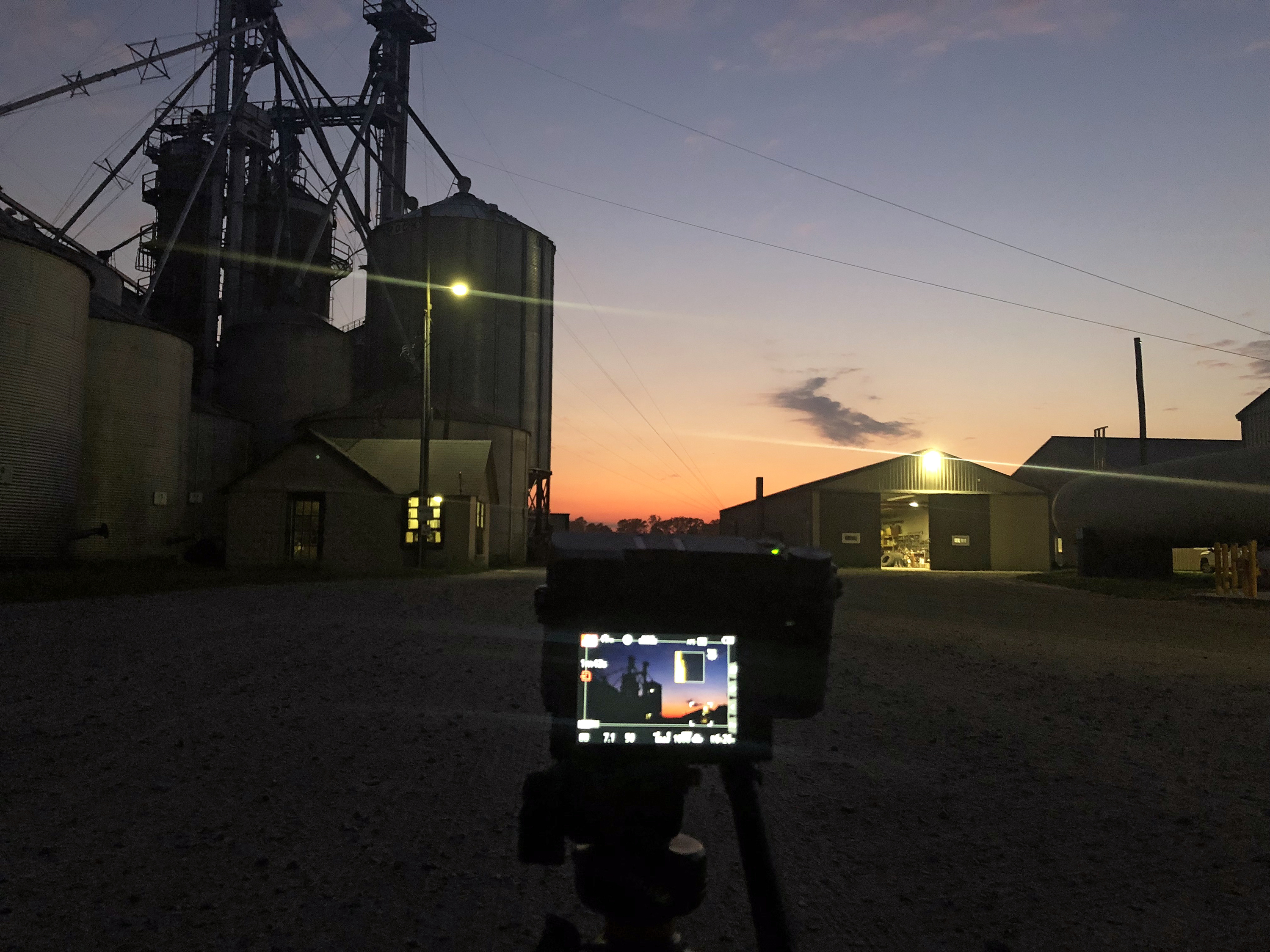 What kind of gear did you use?

K: As with the nature of any documentary work, there was no acting or re-takes. Time and timing was always of the essence. So, I needed gear that I could easily carry on me at all times and that could easily fit in a backpack and hip pack. I used two cameras: a DSLR, and a mirrorless micro four thirds. For all interviews, I used the Canon EOS 70D, and for everything else, I carried my Lumix gx85 with me, which was typically on a Glidecam HD-1000 stabilizer. For sound capture, I relied on the Zoom H4N recorder and RODE VideoMic Pro shotgun microphone. I always carried multiple camera batteries and memory cards with me, and I religiously backed up footage onto two 2TB external hard drives every night. In post-production, I used Adobe Media Encoder for encoding, transcoding and creating proxy files, and Adobe Premiere for assembly, audio and color.

What did your timeline for the film look like?

K: I initially got the ‘green light’ to start putting this film project together back in March 2019. Production occurred over the course of four trips to the Delmarva Peninsula between May and September that same year. The first trip in early May 2019 was only a few short days and was more of a ‘meet and greet’ with each of the farms. But I was able to capture the practice of ‘planting green,’ or planting directly into a green cover crop at Harborview Farms at that time. Altogether, I had a total number of 24 planned production days shared across the three farms.

Once in post-production, I spent about half my work week each week on this project. Towards the end of 2020, I was able to draft a rough cut for review out of almost 74 hours of raw footage. This translates into only 2% of all captured footage and interviews making the cut. Work on the film was then paused for a few months while the joys and new responsibilities of motherhood took precedence. Picking back up in spring 2021, I found myself working almost exclusively at times on this effort to refine edits, mix audio, and correct and grade color. Throughout the post-production process, I maintained communication with each of the farms. It was important to me that they be involved in the film’s development because so much of my ability to film their stories was based on their trust.

What is the overall goal of this film?

K: Through this visual journey with three different family-owned farming operations, I hope that this film increases public awareness on what some of our nation’s farmers are already doing to adapt to and/or mitigate climate change. In addition, I hope that this inspires confidence in the ability of more farmers to cultivate resilient soils.